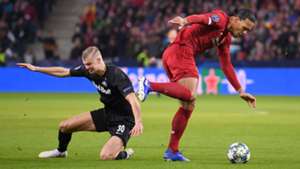 Erling Haaland has described Virgil van Dijk as an "incredible player", and explained why he struggled to get the better of the Liverpool centre-back in the Champions League.

Haaland came up against Van Dijk on two occasions during the group stages of Europe's elite competition with Red Bull Salzburg in the first half of the season.

The Norwegian frontman found the net in a 4-3 defeat at Anfield, but had very little joy when the Reds earned a 2-0 victory at Red Bull Arena, which ensured that Salzburg dropped into the Europa League.

Haaland hit eight goals in six appearances in the Champions League, attracting attention from some of the world's biggest clubs in the process.

It was Dortmund who ended up winning the race for his signature ahead of the likes of Manchester United and Real Madrid in January, with his prolific run of form continuing at Westfalenstadion.

Haaland is in no hurry to pit his wits against Van Dijk again any time soon, however, as he told France Football when asked what kind of defender he hates coming across: "Van Dijk. He is so good.

"He is powerful, quick, he possesses all the qualities. He is an incredible player."

It has been suggested that Haaland is using Dortmund as a stepping stone, but he insists he is "very happy" in Germany and eager to "achieve many things" with the club after committing to a four-and-a-half-year deal.

"I have just arrived. I am very happy here. I want to achieve many things," he added.

"I am only concentrating on that. The stadium here gives me goose bumps, and I feel well here."

Haaland will be back in contention for a place in Lucien Favre's starting XI when Dortmund travel to Parc des Princes to face Paris Saint-Germain on Wednesday night.

Dortmund beat the French champions 2-1 in the first leg of their last-16 Champions League encounter at Westfalenstadion thanks to a superb second-half double from Haaland, who will be hoping to repeat the trick to book the team's spot in the last eight .

PSG will have to make do without the support of their fans when they try to overturn a narrow aggregate deficit, with the contest set to be played behind closed doors due to the coronavirus outbreak.