Van Dijk: It's too negative to say Liverpool will 'just' win the Premier League 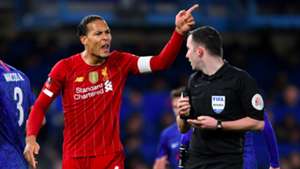 Virgil van Dijk came out strongly in defence of Liverpool after their 2-0 defeat to Chelsea, saying the Reds' season cannot be boiled down to "just" winning the Premier League.

Liverpool were knocked out of the FA Cup on Tuesday, but there is a seemingly inevitable Premier League title to come in the near future.

Jurgen Klopp's side have lost three of their last four games in all competitions but they still have a 22-point lead at the top of the Premier League after dropping points in just two games this season.

Still, their progression to the next round of the Champions League is far from certain after a 1-0 loss away at Atletico Madrid leaves them at risk of exiting the competition.

Having won the Club World Cup and Super Cup already this season, Van Dijk thinks it is impossible to say Liverpool's season has been anything but glorious.

"Just end up with the Premier League? Yeah? Just? It's just a small thing is it? We also won the Super Cup and the World Cup of [club] teams," Van Dijk said at Stamford Bridge. "In life, there are people that are not always satisfied. They are always looking for negative things in life.

"Close to what we all hope to achieve. Let's just go for it, enjoy it. Tonight is a big blow but we were playing against a very good side. Let's focus on 'just' the Premier League, because it's very small, huh?"

Liverpool's impending league triumph will fill the club with a lot of relief having waited 30 years to be crowned champions and having missed out by just one point in their race with Manchester City last season.

Some have accused Liverpool of switching focus from other competitions to ensure they win the Premier League after such a long spell away from the top but Van Dijk insists that his side gave it all to beat Chelsea in the FA Cup.

"I think that's stupid to say [Liverpool weren't bothered about the cups], in my opinion," he added. "Every competition we participate in, we want to win. We showed it tonight with the line-up and the way we kept going, the energy we put in.

"We tried to do as much as possible to win the game. My reaction is that I don't like losing. The way we lost at the weekend was totally deserved. It was a very tough day for all of us. Today we made some changes but everyone who came in did brilliantly.

"The first goal was a mistake that shouldn't happen. But we had a massive four chances in one moment to equalise I think. And then it's a different game. We wanted to keep winning every game that was ahead of us. But we deserved to lose at the weekend.

"We all knew it. We all discussed it. We got over it easily, I think, because we spoke with each other and accepted we have to improve. Tonight was a much better performance but you lose so you're out of the cup. That's the reality."

Liverpool captain Jordan Henderson pulled his hamstring against Atletico Madrid at the start of Liverpool's bad run, where they had won 37 of their 42 matches before his absence.

Klopp's side have since hit a sudden dip in form but Van Dijk thinks losing Henderson is no excuse with the other players Liverpool have in their squad.

"He's been very good for us this season," he continued. "Very important. And he is our captain. We appreciate everything he does for us. But we have quality players all over the pitch. Everyone who's coming in, whether on the pitch or off it, has to contribute with being a leader.

"With being ready to come on, in training or when you're on the bench to challenge the players who's playing in your position. Obviously, we can't deny that he's been outstanding this year, that he's been very important. But the reality is everyone else has to step up."

Liverpool next face Bournemouth as they look to get back to winning ways and ensure they claim the Premier League sooner rather than later.