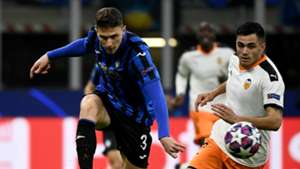 Valencia will be hoping to pull off a famous comeback when they welcome Atalanta to the Estadio de Mestalla for Tuesday's Champions League last 16 clash.

Los Che have a mountain to climb after losing 4-1 in the first leg, and they come into this match with just one victory to their name in seven outings.

Gian Piero Gasperini's men have won five and lost none of their last six games in all competitions, and can be backed at 13/10 (2.30) to sail through to the quarter-finals with another victory here.

The hosts were held to a 2-2 draw by Chelsea in their last Champions League home game, and you can get odds of 14/5 (3.80) on them playing out another stalemate in this one.

Maxi Gomez, Ezequiel Garay, Cristiano Piccini, and Eliaquim Mangala are all injured and Manu Vallejo is doubtful, although Gabriel Paulista is back in contention after missing the first leg due to suspension.

Rafael Toloi is unlikely to feature due to a muscle injury, although Berat Djimsiti could be back in contention.

Despite the three-goal deficit, Alberto Celades is insistent his side does not require a miracle to progress to the next round.

He may have a point considering La Dea conceded nine goals in three group games on the road, although it is hard to see them failing to score themselves.

The Italians have struck at least 10 more goals than any other Serie A team this season - scoring 20 more than leaders Juventus despite playing one fewer game.

Valencia vs Atalanta Tips and Predictions

Considering Valencia have not kept a clean sheet in seven fixtures and seen at least four goals in three of their last four Champions League games, even money (2.00) seems like good value on Atalanta ensuring over 3.5 goals for their fifth game in seven.