Valencia-Atalanta, Getafe-Inter to be played behind closed doors due to coronavirus concerns 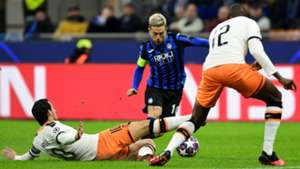 Valencia's Champions League round of 16 second-leg clash against Atalanta and Getafe's Europa League first leg against Inter will be played behind closed doors as outbreak of the coronavirus has impacted additional football matches.

Following a 4-1 first-leg defeat on February 19, the Spanish side will host their Italian opposition on March 10 at the Mestalla in a match that will be played without fans in the stadium.

Meanwhile, Getafe's Europa League round of 16 battle with Inter will also be played without fans as the two matches become the latest to be impacted by the coronavirus.

COVID-19 has had a major impact on football, with matches all over the world being postponed or played without fans in the stadium.

Having begun initially in Wuhan, China, the illness has resulted in 87,000 confirmed cases worldwide and nearly 3,000 deaths, with over 100 of those deaths occurring outside of China.

Travel restrictions have been in effect across China while the 2020 Chinese Super League season has been postponed indefinitely and the AFC Champions League has also been affected with the decision to postpone the group stage.

Italy has been the European country most impacted by the outbreak, with the crisis having impacted all levels of Italian football.

Serie A rescheduled a series of matches this past weekend in response to the outbreak, with clashes between Juventus and Inter, Udinese and Fiorentina, Parma and SPAL, AC Milan and Genoa and Sassuolo vs Brescia all being affected. In addition, the Coppa Italia final has been moved to the end of May.

However, Serie A have not been the only league impacted as matches across Switzerland at the beginning of March were postponed while rugby, golf, cycling, athletics, Formula One, tennis, boxing and other sports have been affected.

In England, Manchester United signing Odian Ighalo was forced to spend the first few weeks of his time the club isolated from the rest of the squad following his loan move from Chinese club Shanghai Shenhua.

Valencia currently sit seventh in La Liga, four points behind fourth-place Getafe and five points behind third-place Sevilla with Atletico Madrid and Real Sociedad in between. Before facing Atalanta, Valencia are set to take on Alaves on Friday while Getafe host Celta Vigo this weekend

Atalanta, meanwhile, are set to play host to Lazio on Saturday as the club holds onto fourth place in Serie A while third-place Napoli face a Coppa Italia battle with Napoli on Thursday before Saturday's match against Sassuolo.