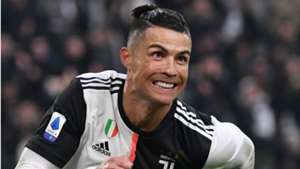 The Bianconeri and Inter had been scheduled to lock horns last week in a match that could prove crucial to the fate of this season's Scudetto.

Coronavirus has hit Italy hard, however, causing havoc in the staging of football matches and other public events.

The derby was postponed along with a host of other matches, mostly in the north of the country which has been most affected by the virus and eventually went ahead on Sunday.

But Serie A imposed stringent controls on the game, with fans and other non-essential personnel banned from attending Allianz Stadium or any other ground in Italy's top flight.

Sunday's match took place with the stands completely empty, which posed a few problems early on when the ball was cleared into the stadium's rafters and nobody was around to retrieve it.

Ronaldo at least tried not to let the situation affect his humour and showed off his fun side as he stepped off the team bus prior to kick-off.

The striker engaged in a round of high-fives with the mascots who would usually greet Juventus into the stadium, although this time he had to use his imagination.

Ronaldo had previously taken advantage of the Derby's cancellation to fly to Madrid in order to take in another grudge match, El Clasico, between former club Real Madrid and Barcelona.

The Merengue finished on top in front of their ex-superstar, winning 2-0 thanks to goals from Vinicius Junior and Mariano Diaz.

On Tuesday, meanwhile, the Portugal international was forced to return to his native Madeira in order to visit mother Dora , who was taken ill in the early hours of the morning.

Juventus went into Sunday's clash in second place behind Lazio, trailing by two points with a game in hand.