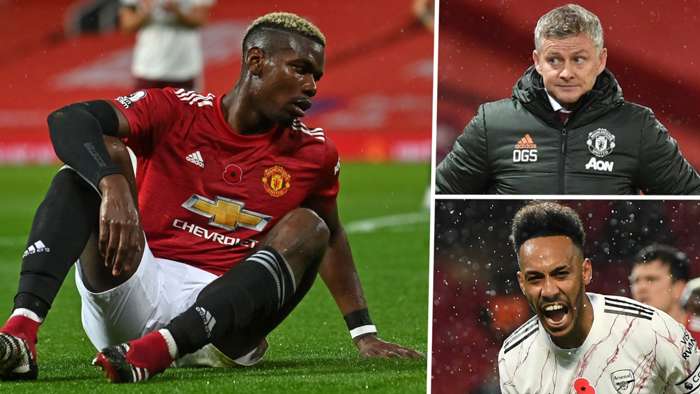 For the second week in a row, Manchester United went into a Premier League weekend celebrating a statement victory in Europe.

After Chelsea eight days ago, this time it was the turn of Arsenal to shut the Red Devils out, though unlike their London rivals the Gunners were able to come away with all three points rather than one after Pierre-Emerick Aubameyang's second-half penalty secured their first league win at the Theatre of Dreams since 2006.

The 1-0 defeat for United leaves them with just seven points from their opening six games of the season, matching the start they made to David Moyes' solitary campaign in charge back in 2013-14.

They are also winless in all four of their home league fixtures this season and already at least four points behind the rest of the Premier League's 'Big Six' teams less than a quarter of the way into the campaign.

The up-and-down nature of their campaign to date sums up Solskjaer's reign, with the Norwegian having now overseen 100 games in charge of the club that has continuously take one step forward, only to take two back almost instantly.

It seemed on Wednesday that things were finally moving in the right direction, with United's Marcus Rashford-inspired 5-0 win over RB Leipzig a tactical triumph on the part of Solskjaer.

But the midfield diamond that worked so well against the Bundesliga outfit proved to be their undoing here as Mikel Arteta's side successfully shut down United's attackers before scoring a deserved winner themselves from the spot.

Solskjaer made the decision to move Fred from the role on the right of the diamond that he had excelled in in midweek to the base, but the former Shakhtar midfielder could not gain any kind of control on the game.

His passing was sloppy while a first-half booking left him walking a disciplinary tightrope thereafter, and it was no surprise to see him replaced by Nemanja Matic midway through the second half after both he and Scott McTominay left the ball for one another from a throw-in, with Alexandre Lacazette going on to take advantage and set up a chance for Aubameyang.

It should have been a system, meanwhile, that brought out the best in Paul Pogba, but the France international was a shadow of the player many at United still hope he can become, with his performance summed up by his ludicrous challenge on Hector Bellerin that led to the penalty.

No United player has conceded spot-kicks than the three Pogba has been responsible for under Solskjaer.

Overall it was largely a horror-show from United just 24 hours on from Halloween. Their full-backs failed to get forward to ensure there was any width to United's attack, and it took them 20 minutes to register what proved to be their only shot of the first half through Mason Greenwood.

Solskjaer switched to a 4-2-3-1 after the break with Greenwood and Pogba flanking Bruno Fernandes and Rashford, but they rarely tested Bernd Leno in the Arsenal goal.

Summer signings Edinson Cavani and Donny van de Beek were thrown on the final 15 minutes, but seemed to be no real plan for how they were going to break the visitors down and ensure they would not go four home games without a win to start the season for the first time since the 1972-73 campaign.

For their part, Arsenal were the better of the two teamswithout ever threatening to run away with a game that pales in comparison to the days when these two teams were fighting for titles and throwing pizza at one another in the tunnel.

Thomas Partey and Mohamed Elneny pressed the United midfield relentlessly, leading to a number of turnovers in possession, while Gabriel Maghalaes was superb at centre-back if a little fortunate to avoid being sent-off in the second half.

But for United, this was another performance that will likely have Solskjaer scratching his head as he returns to the drawing board once again.

Three of United's next four league games are away from Old Trafford, and certainly if there were any season in recent memory where a poor start is unlikely to be disastrous, it is this most inconsistent of campaigns.

That said, if things do not change then even the most impressive of European performances might not be enough to keep the pressure of Solskjaer.