Undroppable to unused: Does Jorginho have a future at Chelsea?

Undroppable to unused: Does Jorginho have a future at Chelsea? 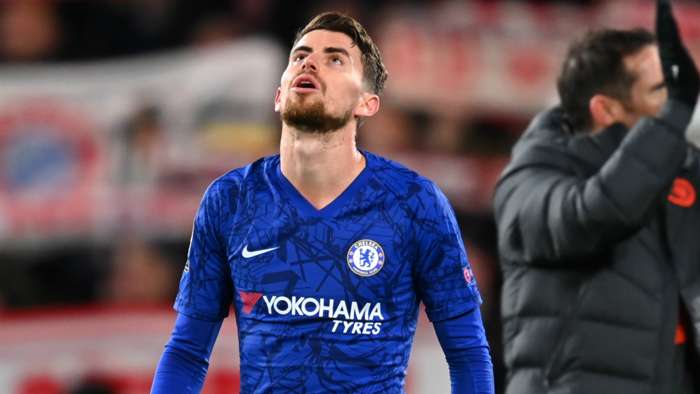 Covid-19 has turned the entire football world upside down.

From major issues - such as the very existence of clubs and the loss of supporters from stadiums - to the minutiae of new tactical systems and fresh selection headaches;every individual within the game is having to reassess their own options.

For Chelsea midfielder Jorginho, life, at least on the pitch, could not be more different.

Before the coronavirus-enforced shutdown of football in March, the Blues' vice-captain was a regular under Frank Lampard. Only skipper Cesar Azpilicueta had played more minutes across all competitions than the Italy international.

Fast-forward four months, however, and Jorginho now finds himself very much on the fringes at Stamford Bridge.

The 28-year-old is yet to make an appearance since top-flight football returned in England having been an unused substitute in each of Chelsea's last four league and cup matches.

It was telling that when N'Golo Kante went off injured in the 78th minute of Saturday's win over Watford that it was teenager Billy Gilmour, not Jorginho, who Lampard ushered from the bench to take the France international's place.

Kante has been deployed in Jorginho's favoured No.6 role since the restart, and with Gilmour the latest to emergefrom the club's famed academy system, it is not unfair to suggest that Jorginho now finds himself, at the very best, third in the pecking order.

It is quite the fall from grace for the former Napoli star.

Having been seen as beingindespensable by Maurizio Sarri during his first season in west London, it seemed that Lampard was happy to have Jorginho retain his place in the starting XI while inexperienced youngsters were given their chances elsewhere on the pitch.

Such was his happiness with life in the capital that the midfielder began intensive English lessons so as to be able to communicate better with his increasingly homegrown group of team-mates.

But now he finds himself very much in the shadows, and despite Kante and fellow midfielder Mateo Kovacic being ruled out of Tuesday's clash with Crystal Palace, it is not a given that Jorginho will step in and start at Selhurst Park.

"I don’t want to go into the personal details. I just have to pick a team as I see best. They are just my choices," Lampard told reporters in his pre-match press conference when asked about Jorginho. It is the third such time that the metronomic passer has been broughtup duringrecent meetings with the media.

"He has been very professional about it. He wants to play as every player does. One of the hardest parts of the job is telling a player who is not playing, or picking a squad and leaving out players.

"Jorginho always trains well. He has handled it professionally and that’s what I would expect. It is important for players in a long season, with the competitive squad that we have, that they are there to support players when they are out, and he has done that. So we will see with my selection tomorrow."

Goalhas learned that Jorginho is unhappy with his current situation at Chelsea, though given the expected difficulties that the post-lockdown transfer market is going to face this summer, potentially leaving the club is not something that will be easy to pull off.

It is understood that Sarri is keen to reunite with the midfielder at Juventus - a fact that has not been lost on Lampard and continues to frustrate the Blues boss with the season still ongoing.

It had been suggested that Juve would offer Miralem Pjanic to Chelsea as part-exchange for Jorginho, but the Bosnia-Herzegovina international has since agreed to join Barcelona as part of the deal that will see Arthur Melo swap Camp Nou for the Allianz Stadium.

Regardless, Chelsea had no interest in signing Pjanic, and instead will want to recoup as much of the £57 million ($86m) they paid for Jorginho in July 2018 if they do look to move him on during the off-season.

Such a fee would prove difficult for Juventus to stomach given the impact of Covid-19 on their finances. With their interest only casual for the time being, it seems unlikely Jorginho will be Turin-bound unless the two clubs can get creative by including players in the deal or agreeing a loan deal with the obligation to buy at a later date.

"His price-tag has certainly gone up over the last two years. He has done well in London and become a regular for Italy," Jorginho's agent, Joao Santos, told Italian football websiteCalciomercatoin a recent interview. “He is now the vice-captain at Chelsea and has amassed a great deal of experience playing in the Champions League and Europa League.

"I think it’s very unlikely an offer will come in for Jorginho because nobody can afford to make that kind of investment in the market right now.

“Because of the pandemic, nobody knows when we can return to normal or even play with fans in the stadium, so that’s a big problem for the transfer market.”

Juventus are yet to make any kind of contact with Chelsea regarding a transfer, and so, for now, it seems that Jorginho is destined to see out the season on the sidelines unless something alters dramatically in the coming weeks.

It is felt that his penalty-taking aside, he offers little to the team from an attacking point of view, with even Kante able to drive forward from his new role at the base of Lampard's midfield three.

Kovacic, Mason Mount and Ross Barkley have all enjoyed stellar campaigns, and as such theneed to move Kante back into his previous position as a No.8 has been minimised. That all-butensures thathe will not vacate Jorginho's favoured spot on the pitch when he returns to fitness.

Nineteen-year-old Gilmour is clearly considered ready to deputise regardless, meaning that Chelsea will not feel forced to let Jorginho -whose contract runs until 2023 - move on the cheap given they do not need money to sign a replacement.