USWNT: Which players didn't kneel during national anthem in 2021 matches and why?
Match

USWNT: Which players didn't kneel during national anthem in 2021 matches and why? 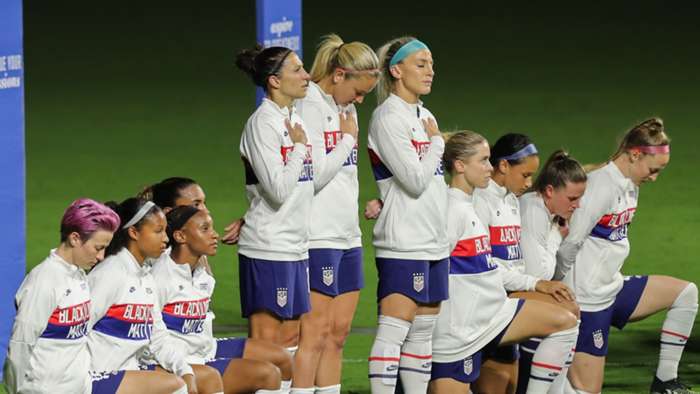 The act of kneeling during the national anthem in U.S. sport as a means of a silent protest against racial inequality and injustice is a legacythat began withformer San Francisco 49ers quarterback Colin Kaepernick, who himself was inspired by Martin Luther King Jr.

With racial tensions and systemic racism still rife in the United States, the U.S. Women's National Team has been forced to reckon with the significance of the American national anthem - creating a controversy around the team relating tothose who decided to kneel during the song, and those who decided to stand.

In the team's first game against Colombia in January,Carli Lloyd was one of four USWNT players to stand during the anthem. She was joined by team-mates Julie Ertz, Kelley O’Hara, and Lindsey Horan.

Ertz stood for the second game against Colombia, and was joined by Jane Campbell and Emily Sonnett.

Lloyd, Ertz and Horan also stood for the anthem in the February SheBelieves Cupfixture against Canada.

With the gesture of kneeling during the anthem having strong associations with protesting against racial violence, the actions those who stoodhave been questioned.

Lloyd suggested a more rose-tinted reasoning behind her decision, but still remained vague about how the team can truly "support"each other amid discussions of racial injustice.

“I think the beauty of this team is that we stand behind each other no matter what,” Lloyd said. “Players decided to kneel, some players decided to stand, and at the end of the day, we have each other's backs. Ultimately, we're all here to support one other in any way that we can, and that's what's amazing about this team."

O'Harawent in the direction of believing that kneeling is not the only way to fight for racial equality.

“For me, I’ve come to a place where I just fully believe that you can stand while also heartily believing that Black lives matter and being committed to fighting for racial justice and making this world a better place,” said O’Hara on thepodcastLaughter Permitted.

While it is true the act of kneeling can lose its meaning without further action, it is possible to both kneeland take action againstracial injusticewhile raising awareness about police brutality and the violence against Black Americans.

And for a team as visible asthe USWNT, the image of the entire squad kneeling in solidarity not just for Black Americans - but for the Black team-mates within the squad - would be immensely powerful, and potentially informative, to viewers everywhere.

Rapinoe became the first USWNT player to kneel during the anthem in 2016, prior to an international friendly.

Following her gesture, U.S. Soccer implemented a rule that required their players to "stand respectfully" for the anthem - but the policy was reversed following the killing of Floyd.

The February 21 fixture against Brazil in the SheBelieves Cup, however, marked the first instance since the policy was changed of the entire team all standing during the anthem - a decision that was made collectively.

But whetheror not that was the right choiceremains to be seen.

"Those that were collectively kneeling felt like we were kneeling to bring about attention to police brutality and systemic racism, and I think we decided that moving forward we no longer feel the need to kneel because we are doing the work behind the scenes," Dunn said about the decision.

"We never felt we were going to kneel forever, so there was always going to be a time that wefelt it was time to stand.

"I think we're all proud that we are doing the work behind the scenes and it was just a game that we felt we were ready to move into the next phase and just continuously fight for change."

Dunn has been an encouraging force within the USWNT both on and off the pitch, taking it upon herself to lead the fight for social change, regularly speaking about racial inequality in the United States.

But it is also important for her white team-mates to also speak up on racial inequality.

With Dunn's leadership, it is hopeful that the USWNT squad - especially its white players - will continue to do their part in not just working towards social change but also educating themselves aboutsystemic racism.

“For players that are standing I would say, continue to educate yourself," Rapinoesaid.