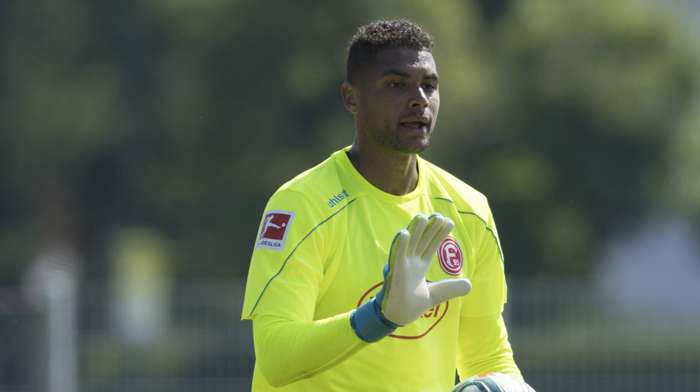 United States international goalkeeper Zack Steffen will return to Manchester City next season with the intention of fighting Ederson for his number one spot.

Steffen, 25, spent last season on loan at Fortuna Dusseldorf and made a strong impression despite the club failing to avoid relegation from the Bundesliga.

However, he suffered two knee injuries which ended his season prematurely after starting the first 17 matches of the campaign.

After spending some time in Germany with Freiburg as a youngster, he had starred in the U.S. and was named MLS Goalkeeper of the Year in 2018.

Steffen will step into the role of number two to Brazilian keeper Ederson, who was seen as culpable for two goals in City’s Champions League exit to Lyon on Saturday.

Former England keeper Scott Carson is also set to return to the Etihad Stadium with the club keen to extend his loan spell from Championship club Derby County.

The 34-year-old spent last season at City although he did not make a single appearance for the club, but was on the bench for the final four Premier League matches in July and was part of the Champions League squad in Lisbon.

Meanwhile, fellow keeper Aro Muric is expected to go out on loan to gain more experience after a disappointing time at Nottingham Forest last season.

The Kosovan international started the first four games of a season-long loan with the Championship side but was then dropped and didn’t play in the league again, with his spell curtailed after the Covid-19 shutdown.

Muric was called back to City early in the previous campaign to provide cover for Ederson after Bravo suffered an Achilles tendon injury that ruled him out for the season.

Rotherham, who have been promoted to the Championship, have been linked with a loan move for the 21-year-old.

Former City youth team-mate Lukas Nmecha is another who is set for a loan deal, with Belgian club Anderlecht expected to complete a deal for the highly rated striker.

City’s first-team squad are set to return for training on August 31 with a number of other loan players due back, including defenders Angelino from RB Leipzig and Tosin Adarabioyo form Blackburn Rovers.