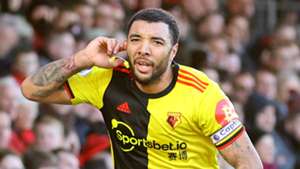 Watford captain Troy Deeney says his side took inspiration from Tyson Fury ahead of their shock 3-0 defeat of Liverpool on Friday.

Fury upset Deontay Wilder in a heavyweight clash the previous weekend with an aggressive display that forced the American fighter's camp to throw in the towel.

The relegation-haunted Hornets saw off the previously undefeated Reds at Vicarage Road with a ruthless attacking display inspired by the boxer, but Deeney admitted they were helped by an uncharacteristically meek display by the presumptive Premier League champions.

"We took heed off Tyson Fury," Deeney told the press after the match.

"We thought we're going to go on the front foot and have it out with them. We were good and they were a little bit off.

"Let's not act like they were at their best. We took our chances and I don't know what more to say. I don't want to be disrespectful to them."

The upset ended a run of five straight defeats for Watford, and moved them out of the bottom three.

Deeney was categorical when saying that as impressive as the win may have been it will count for little if his team are relegated, even going as far to say he'll be angered if reminded of it if the worst happens.

"It's three points," the 31-year-old added. "We don't get an extra point for beating Liverpool or [see it as] we're out of the bottom three, that's it, we're done.

"There's 10 games left and we've got to graft away. It is what it is. I won't look at this game in two months' time if we're relegated and go, 'Oh remember that game against Liverpool'. I'll be p*ssed off."

Deeney said that manager Nigel Pearson organised a relaxing week for the players, including a yoga and swimming day in place of their usual training on Thursday.

He believes giving the team a break was instrumental in their shocking win.

"Everyone was putting too much pressure on this," he went on.

"That's testament to the manager, man-managing and not getting caught up in the hype over 'We have to win this game'.

"So we had our least demanding week in months. I don't think that's going to be something the gaffer does going forward, but we go again."