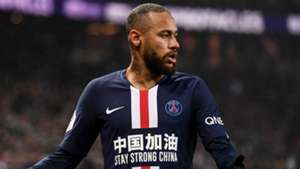 Past problems between Neymar and Strasbourg players will not prevent Thomas Tuchel from including the Brazil star in Paris Saint-Germain's starting line-up this weekend.

That injury kept Neymar out for three months, which meant he missed the Champions League last-16 tie with Manchester United, who progressed on away goals after a 3-3 aggregate draw.

This weekend's fixture against Strasbourg comes just four days before the second leg of the clash with Borussia Dortmund, who won the first leg 2-1 to leave PSG facing another potential last-16 exit.

Tuchel revealed Neymar is carrying a knock from the Coupe de France win over Lyon in midweek but, if he is fit, the PSG boss will not rest the player this weekend just because of his history with Racing.

"No, it's a football game and anything can happen," Tuchel told a news conference on Friday.

"We can't protect them. We have a past with Strasbourg, but I can't think they can do weird things. I am not afraid.

"He took a hit against Lyon, so we have to decide. If he's ready, he'll play."

However, Tuchel is looking ahead to the return fixture with Dortmund when it comes to the fitness of Neymar's compatriot Thiago Silva.

The defender has missed PSG's last two fixtures with a hamstring injury that was initially expected to force him out of the second leg against the Bundesliga side.

Yet he has returned to training ahead of schedule, giving Tuchel hope he could actually have his captain available in the Champions League.

"I am more optimistic," Tuchel said.

"He has no more pain. It's the timing for him. It was possible that he might play 45 minutes [against Strasbourg].

"[But] it's too big a risk for Saturday with just one training session. We will have more intensity Saturday and Sunday for him here.

"I'm waiting for Monday; we will decide after.

"I speak with Thiago almost every day. He's completely preparing for Wednesday's game. He absolutely wants to play.

"We will decide Tuesday or Wednesday. This is the plan. We cannot push, be impatient."