Tuanzebe wants to be a leader for Man Utd 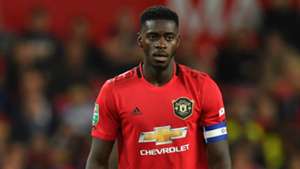 Manchester United defender Axel Tuanzebe has made it clear he wants to be a key leader in Ole Gunnar Solskjaer's plans in the not too distant future.

The 22-year-old has made 10 appearances for United this season and was named captain for the Carabao Cup tie against Rochdale back in September.

He has been out of action since December due to a hamstring injury, but featured for the Under-23s against Stoke on Monday night and now has his sights on becoming a leader in the first-team squad.

"I wouldn't say necessarily [I want to] just be captain, just be a leader for the team," Tuanzebe told the UTD podcast . "Just be someone the team is going to turn to.

"There are other problems in football as well that people do not see. I always say to the lads if you need anyone or want to talk or anything, just call me out. Especially in the youth age groups with lads I've grown up with.

"If a player is affected off the pitch, it affects his performance on the pitch. If we have everyone operating at 100 per cent we're a much better team."

Tuanzebe enjoyed a successful loan spell at Aston Villa last season, which he feels helped him to become a better leader, especially in terms of being critical of each other on the pitch.

He added: "For me, going out on loan at [Aston] Villa, I experienced that first-hand. I never took it personally. I was demanding better from my players. It's missed a lot in football now.

With United chasing down Champions League qualification, the FA Cup and the Europa League, Tuanzebe could be thrust back into Solskjaer's plans.

Solskjaer has been keen to promote youth during his United tenure and Tuanzebe has acknowledged the impact that can have on a dressing room, but revealed he remains close to team-mates Marcus Rashford, Timothy Fosu-Mensah and Scott McTominay.

"Changing rooms change a lot, you have players coming and going," he said. "You get advised not to ever be too close to anyone just because it's a common goal situation, the business of football.

"I think if you're close to someone you can always maintain your relationship off the field. I still have contact with a lot of players from the youth team. I always reach out to them, I always like to see where people are going and how they're doing because they've played a part in my life.

"Rashy, Timo and Scott we've all come through the same system, relatively at the same time, we've experienced similar things, so we're close."