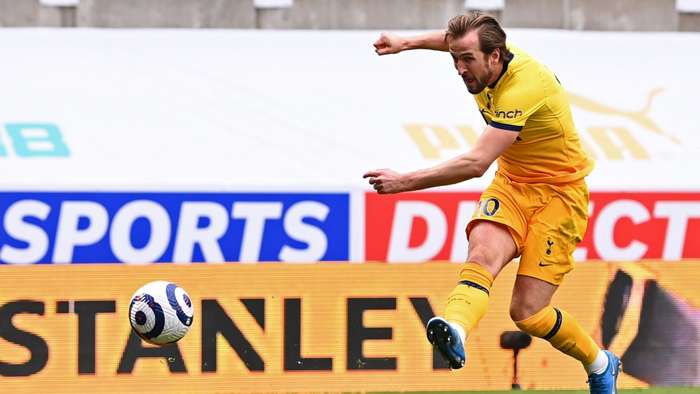 Harry Kane has written himself into the Premier League record books once again after snagging a first-half brace for Tottenham in their 2-2 draw with Newcastle at St James Park on Sunday.

The England captain, fresh from international duty with the Three Lions, netted twice inside four minutes to haul Spurs back from Joelintons opener on Tyneside.

Though Joe Willock struck late to salvage a point for the relegation-threatened Magpies,the striker still set both a new top-flight record in the modern era and matched another one, to further enshrine his burgeoning legacy as one of the British games modern greats.

Having seen his side go down thanks to a low Magpies strike, the forward seized momentum back inside two minutes with a close-range finish.

Four minutes later, he doubled his tally for the day after linking up with Tanguy Ndombele on the right flank, stroking a powerful effort in at the far post beyondMartin Dubravka.

In doing so, Kane took his total of away goals in the Premier League to 84 - more than any other player has achieved for a single club in the competition.

Not only that, but the 27-year-olds efforts also meant that he has joined a select group of England legends, becoming just the fourth man in the modern era to score five goals each at five different away venues in the Premier League.

Only Alan Shearer, Wayne Rooney and Michael Owen had previously achieved the feat, but now with his success at St James Park - to go alongside similar triumphs at the King Power Stadium, Selhurst Park, Goodison Park and St Marys - Kane has joined rareified company.

Kanes brace ultimately did not prove to be the crucial winner it could have been for Tottenham, as Jose Mourinhos side failed to capitalise on Chelseas slip-up against West Brom in the race for Europe after Willock netted an 85th-minute equaliser.

It means that Spurs remain adrift of the top four, threatening their bid toavoid successive campaigns in the Europa League.

Having become a Champions League mainstay under Mauricio Pochettino, Spurs found themselves in the second tier of European club football this season, and looked among the favourites to lift the trophy before a shock last-16 exit toDinamo Zagreb last month.