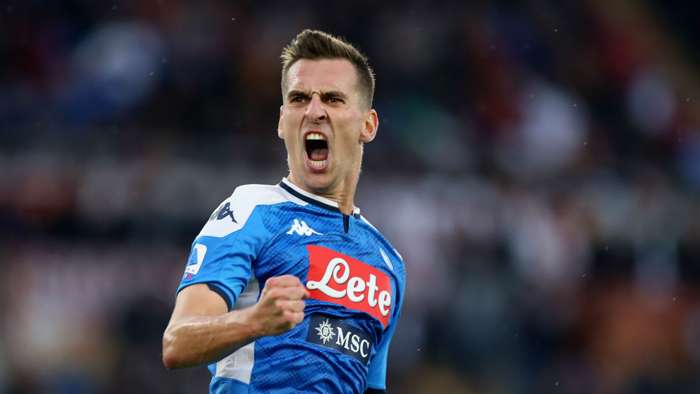 Tottenham are working on signing Arkadiusz Milik from Napoli but face tough competition from Juventus for his signature, sources close to the negotiations have confirmed.

The Poland international striker's contract in Naples will expire next season and the Bianconeri are trying to fix up a swap deal in order to replace their main forward, Gonzalo Higuain, with another strong attacking option.

Juve have put centre-back Cristian Romero, currently on loan at fellow Serie A side Genoa, on the table, however this has been refused by Napoli who are not keen to swap a striker for a defender.

Talks are ongoing about including winger Federico Bernardeschi in a deal, while Luca Pellegrini, despite being a left-back, is considered an exciting enough prospect to be of interest to the Neapolitan club.

Juve are already preparing for next season as they defend their Serie A crown against challenges from Lazio and Inter, with midfielder Dejan Kulusevski signed from Atalanta and the swap deal with Barcelona involving Arthur and Miralem Pjanic completed, while the future of Higuain remains uncertain.

The discussions, however, have allowed other clubs to stay in the race for Milik, and Goal has learned that Tottenham are among those sides.

Although Milik is said to be keen on joining Juve and linking up once again with former Napoli manager Maurizio Sarri, a move to Turin is not a certainty and Spurs is still a possible option.

Spurs are looking to boost their attacking options, with there currently a lack of quality competition for first-choice frontman Harry Kane. An established striker such as Milik, whose physical presence also offers something different to Kane's style, is also attractive for manager Jose Mourinho.

The 26-year-old, who has 14 goals in 49 international appearances for Poland, has been a regular source of goals for Napoli since joining the club from Ajax in the summer of 2016. This campaign he has registered 10 strikes across 19 Serie A appearances.