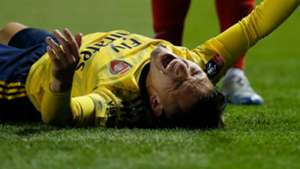 Lucas Torreira may have seen an ankle injury bring his 2019-20 campaign to a close, with Arsenal expecting the Uruguayan midfielder to be sidelined for up to 10 weeks.

The combative South American suffered an untimely blow during an FA Cup fifth-round clash with Portsmouth.

He was forced from the field early on at Fratton Park, with it soon revealed that he had suffered a fracture to his right ankle.

Arsenal were initially reluctant to put a timescale on his recovery, with further medical assessment required before the full severity of the problem could be determined.

The Gunners have now revealed that Torreira may not be seen again for the rest of the season.

Even their most positive prognosis, which puts the 24-year-old out for eight weeks, would have him struggling to figure again this term.

Arsenal's latest fitness update on the club's official website said: "Sustained fracture to right ankle during Portsmouth (a) on March 2.

Torreira has taken in 33 appearances for Arsenal this season and was hoping to nail down a regular role under Mikel Arteta.

He may be denied the opportunity to win further favour with a new boss until 2020-21.

The Gunners will certainly need to look for alternative options when they return to Premier League action on Wednesday with a testing trip to Manchester City.

Arteta will take in a reunion with his former employers unbeaten in top-flight competition through 2020 - with a 1-0 victory over West Ham collected last time out.

The Spaniard may be without Shkodran Mustafi, though, for a visit to the familiar surrounds of the Etihad Stadium.

Arsenal have stated that the German defender continues to nurse a "tight right thigh" and will be carefully monitored before midweek duty.

Another defensive option, January signing Cedric Soares, is expected to return to full training this week as he waits on a debut for the club.

Sead Kolasinac is not expected to come back into contention until the end of March, after suffering a shoulder strain, while Calum Chambers is a long-term absentee with knee ligament damage.