Top half or relegation? Anfield carnage shows Leeds' season will be on a knife-edge

Top half or relegation? Anfield carnage shows Leeds' season will be on a knife-edge 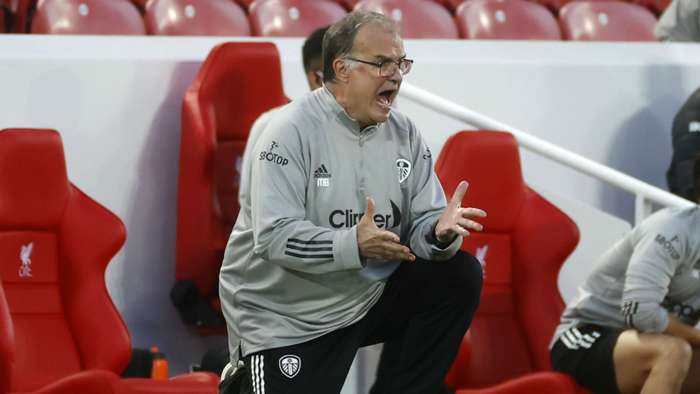 We expected chaos with Marcelo Bielsa, but not quite the sheer carnage that unfolded against Liverpool at Anfield on Saturday night.

Bielsa is a manager of paradoxes and he didn’t disappoint.Leeds United were hyper-choreographed yet anarchic; sharply intelligent yet hopelessly naive; an attacking menace yet scored a 0.27 expected goals xG.

It was a wild game of football and, for Leeds, a microcosm of the season ahead -a high-wire act that could see them finish in the top half or relegated.

The most common reaction to Leeds’ 4-3 defeat to Liverpool was that they showed they can mix it with the best, and will be competitive this season. That might be true, although an alternative reading is that Leeds’ remarkable openness to counterattacks, willingness to empty central midfield, and extraordinary commitment to going forward will play into the hands of the majority of their opponents.

The Bielsa-philosophy Leeds only have a plan A. On Saturday, as in any other week, Leeds played in a 4-1-4-1 formation that quickly morphed into a 3-3-1-3 when in possession, with the three central midfielders splitting off to form a shape that looks to create triangles in the wide areas.

The key to attacking is quick vertical passes into the runners – of which there are as many as five hovering on the last line of the opposition defence. Kalvin Phillips drops into a quarter-back position to play direct balls out wide, where overloads are created by the midfielders vacating the central zone, or into the feet of forwards as they drop off the front to create space for on-rushing attackers.

Off the ball, Bielsa presses high and remarkably aggressively in a man-to-man system, with each player following their opponent around the pitch even if this means being pulled far out of their base position.

The man-to-man press, combined with extreme attacking lines and the high volume of runners, aims to confuse and overwhelm. But there are flaws.

The most shocking visual image watching Leeds play is just how few bodies they have in the middle of the park. Bielsa empties out midfield in order to provide the ‘wall pass’ - completing a triangle - out wide, or to provide extra runners from deep for the direct option, as they look to go in behind the opposition defence.

Leeds will regularly have two centre-backs, Philips on his own, and seven players bunched together high up the pitch. Liverpool initially found this very difficult to cope with, such was the unusual aggression and boldness of Leeds’ approach; Virgil van Dijk was clearly unsettled and the visitors scored three goals thanks to some deer-in-the-headlights defending.

But over the 90 minutes Jurgen Klopp’s side consistently caught Leeds out, bursting forward in acres of room in central midfield as Phillips attempted to deal with four or five red shirts swarming around him. And the size of those gaps cannot be overstated.

It is truly extraordinary how much of midfield is unoccupied, as this screen grab demonstrates.

This end-to-end chaos suited the hosts partly because of their superior quality in one-on-one battles, but also because they are so effective in the transition.

Leeds’ furious desire to commit men forward, and play so directly, allowed Liverpool to gallop into acres of space in virtually every zone of the pitch. Mohamed Salah, Roberto Firmino, and Sadio Mane all excelled in out-manoeuvring the man-to-man marking, too, dropping short then spinning in behind to pull Bielsa’s back four out of shape and easily create space in the penalty area.

Leeds might have scored three goals, but Liverpool had 22 shots and recorded an xG of 3.15. Last season, they averaged 1.98 per game.

Few teams can compete with Liverpool’s attacking threat, of course, but nevertheless it is wrong to assume Leeds’ emphatic pressing will inevitably give them the upper hand against even the middle class of Premier League clubs.

Ultra-attacking and possession-dominant football can work in the Championship, where the playing field is more even, but the vast financial chasm within the Premier League has created an entirely different tactical landscape that might not favour Bielsa.

The ever-widening gap between the ‘Big Six’ and the rest has made England’s top flight more territorial than ever before. Clubs are either financially powerful enough to dominate possession or, knowing their weaknesses, they adopt tactics designed for sitting in a mid-block (or deeper) and waiting for chances to counterattack behind the high line.

From Southampton to Newcastle to Wolves to Sheffield United, being conservative off the ball and ruthless in the transition is the de facto way of playing Premier League football. Just look at Aston Villa, who learnt that the hard way, hurtling towards relegation with expansive possession football before retreating into a defensive shell for Project Restart, winning 10 points from their final four matches.

That is not to say Leeds should do the same, but rather that mid-table Premier League clubs are already set up to exploit Leeds United’s empty midfield and openness to the counter.

Think of Ralph Hasenhuttl’s use of Nathan Redmond and Danny Ings, or Wolves’ inside forwards Adama Traore and Daniel Podence, or Crystal Palace’s sudden bursts from Wilfried Zaha and Jordan Ayew. All would flourish in an end-to-end contest if given the same sort of midfield space Liverpool enjoyed on Saturday.

The problem for Leeds United is not how 'Bielsaball' can cope with top quality attackers like Mane, Salah, and Firmino. It is how such an extraordinarily risky, and open, tactical system can work in a division in which clubs have been forced to define themselves by their counterattacking prowess.

Leeds might overwhelm and suffocate opponents. But don’t rule out some troubling collapses, or perhaps even a relegation battle.