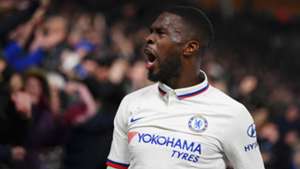 Fikayo Tomori admits to having endured a "difficult period" at Chelsea, with the 22-year-old defender seeing a breakthrough season at Stamford Bridge stall.

Another promising product of the Blues' academy system was among those to be given a Premier League stage on which to unlock their potential by Frank Lampard early in the 2019-20 campaign.

The Chelsea boss knew all about the commanding centre-half from having spent a season working with him on loan at Derby.

Tomori quickly established himself in a star-studded side, earning senior international recognition with England along the way.

He has, however, taken in just three outings in 2020, with Antonio Rudiger and Andreas Christensen having become Lampard's favoured pairing at the heart of his back four.

On the challenges he faces, Tomori told the Blues' official website: "It's been a difficult period for me, but I'm working hard to try and get back in the team.

"There is a lot of competition for places, not just in my position, so there are going to be disappointed people when they're not playing.

"Throughout the whole season the manager has said if you train well and show why you should be in the team, he will put you in, and then it's up to you to try and stay in the team.

"There have been many examples where people have come in and done well. Training is competitive and intense, and then when you get on the pitch someone is banging on the door which keeps everyone on their toes.

"I'm just staying positive, and in the grand scheme of things the most important thing is that the team wins."

Chelsea have been able to cling onto their standing inside the Premier League's top four despite finding consistency hard to come by of late.

They face another stern test of their credentials when playing host to Everton on Sunday, with former boss Carlo Ancelotti preparing for a return to west London, but morale in the camp is high after sending Liverpool crashing out of the FA Cup in midweek.

Tomori added on the Toffees test: "We expect a tough game. Earlier on in the season they managed to beat us.

"They have a new manager now; they have had a lot of good results. But they are coming to Stamford Bridge and we want to make it difficult for them. They have good players but if we approach the game in the right way I'm sure we can get the three points.

"We're on a high after the Liverpool result. For us to play the way we did and beat them gives us a lot of confidence. We want to take that into the Everton game.

"It's another home game, in front of our fans who I am sure will be buzzing, and it's a chance to get three points and cement our place in the top four a bit more."