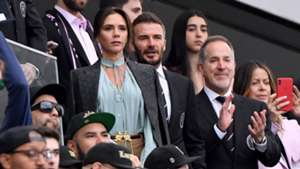 Inter Miami's co-owner David Beckham has expressed his pride and excitement after his team lost 1-0 to LAFC in its first Major League Soccer game.

The MLS newcomer struggled to find some beginners' luck and was punished by a moment of individual brilliance from Carlos Vela to break the deadlock just before half time.

LAFC won the Supporters' Shield last season and provided stiff opposition for Inter Miami's opening fixture, but Beckham felt there were positives to take from the match.

Beckham posted on Instagram: "Very proud moment for our club today and the team did us proud... It's been a long journey but this is only the beginning ... To Diego (The Boss) the team and our entire staff at @intermiamicf we should be very proud how far we have come and what the future holds... Exciting times ahead #VamosMiami"

Former CONCACAF Champions League winner Diego Alonso manages the side, and he was also happy with the first performance despite the loss.

"We had several very clear chances to get ahead on the scoreboard," Alonso told the club's official website. "It was the same after going 1-0 down as we pushed to get an equalizer. I'll stay with that. With the heart the team showed.

"Surely we have to improve in football, but with this heart and with this intensity with which the team plays, we will surely win many games.

"Against maybe the best team in the league we gave a tremendous picture today of what we can become. With only six weeks of work, the merit is certainly from the footballers for what we have done today and the work they have done."

Star signing Rodolfo Pizarro saw his effort whistle past the post in what was Inter Miami's best chance and the Mexico international put the defeat down to a lack of being clinical in front of goal.

"We played a great game. Unfortunately, we weren't able to finish our chances but in the end, it was a great game," the central midfielder added. "The man of the match was their [LAFC] goalkeeper and I think that says a lot about our game."

Captain and MLS veteran Luis Robles had a busy afternoon in goal and was very optimistic after the match.

"I felt like we played well enough to get a point, I really thought optimistically that we'd nick one at the end and it'd be a fair result."

Inter Miami will travel to Audi Field to face Wayne Rooney's former side D.C. United in its second league outing next week, but the big date on Beckham's calendar will be the sold-out home game against the LA Galaxy in two weeks' time. Source : goal.com
Recommended News :