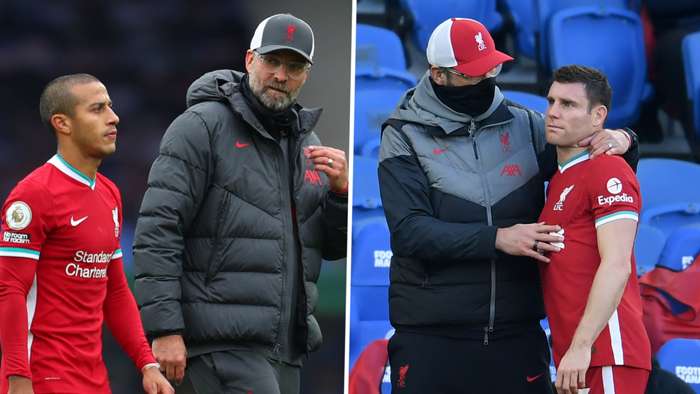 Jurgen Klopp is not expecting his injury headache to lift any time soon, with the Liverpool boss revealing that Thiago Alcantara is “not even close” to a return as James Milner joins him on the treatment table.

A Merseyside derby date with Everton in October got that ball rolling, with Thiago and Virgil van Dijk picking up knocks.

Neither has been seen since, with the latter forced to undergo surgery on knee ligament damage.

Setbacks have been suffered on a regular basis since themeeting with the Toffees, with Jordan Henderson, Joe Gomez and Trent Alexander-Arnold among those to be laid low.

Alex Oxlade-Chamberlain is a long-term absentee, having been ruled out over the summer, while Milner is now nursing a hamstring complaint.

Pressed on whether he expects to have the likes of Thiago back at his disposal for continental and domestic duty in the coming week, Liverpool boss Klopp told reporters: “I don’t want to tell Ajax and Wolves too much, but I don’t think so.”

He went on to tell talkSPORT that theSpain international midfielder will not be back any time soon, but did ease concerns over Neco Williamsafter he was taken off at half-time in the1-1 draw at Brighton on Saturday.

Itwas in that contest, which saw the defending Premier League champions frustrated by more controversial VAR decisions, that Milner picked up his injury.

He was forced off 16 minutes from time, with Klopp now waiting on an update from his medical staff when it comes to the versatile 34-year-old.

The German tactician said: “I have no idea how bad the Milner injury is, we’ll see with that.

“With Nico, it’s just the situation. We had an opportunity to bring on Hendo, and we had the choice between Neco, who played 90 minutes a couple of days ago, or Milly who played as well, and I decided for Milly. That’s all.

“Milly is absolutely not cool, the result was not cool, but the rest was good, I’m really proud of the performance from the boys.”