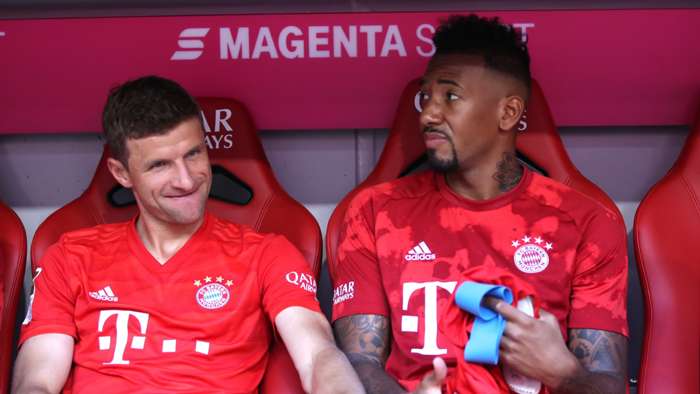 Germany manager Joachim Low says that there are no plans to recall Thomas Muller and Jerome Boateng into the national team despite their recent contributions to Bayern Munich's Champions League triumph.

Muller made 50 total appearances for Bayern this season, scoring 14 goals, while Boateng returned to the starting XI later in the season,making 39 appearances.

Both 30-year-old Muller and 31-year-old Boateng were left out of Low's latest Germany squad, with the manager previously saying in 2019 that he would no longer call up the two as well as Mats Hummels.

AfterTuesday's squad announcement, Low reiterated that commitment as all three were once again left out for upcoming UEFA Nations League games against Spain and Switzerland.

"Both players had very good performances and they showed how important they are for this team," Low said of Muller and Boateng. "However, after the World Cup, we decided to go with other players. We want them to have space and time to develop."

For his most recent squad, Low handedOliver Baumann, Robin Gosens and Florian Neuhaus their first call-ups to the senior team.

At age 30, Toni Kroos is the oldest outfield player with Ilkay Gundogan the only other non-goalkeeper to be over the age of 26.

Low says that he plans to continue the trend of calling in Germany's younger stars, adding that he has no current plan to reverse course and call in the more experienced players any time soon.

"These young players have developed very well and we managed the changes very quickly," he said. "So there is no reason for me to change anything in this direction."

He added: "Should the situation be different, I would be the very first person to revise a decision. Currently, however, I don't see any reason. This path is good."