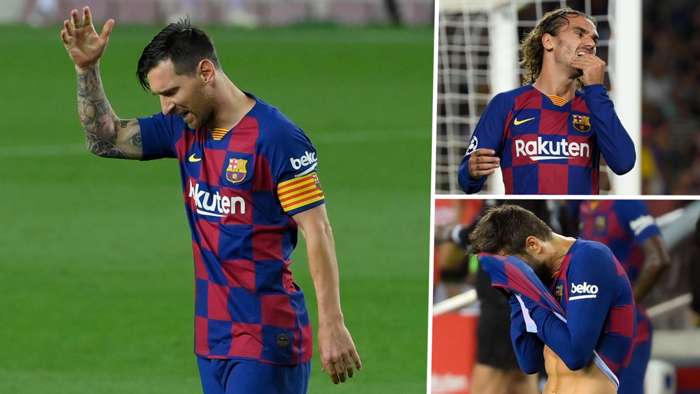 Lionel Messi has had enough.

"We didn't want it end like this but it represents how the season has gone," Messi toldMovistar after a dismal 2-1 defeat at home to Osasuna on Thursday night.

"We were a very erratic, very weak, low-intensity team... We lost a lot of points and this game is a summary of the season.

"We have to be self-critical, starting with the players but also across the entire club. We are Barca and we have to win everything. We can't look at Madrid… Madrid have done their job, but we have helped them a lot.

"If we want to win the Champions League, we have to change a lot. If we continue like this, we will lose the game against Napoli."

Messi has done his bit; 23 goals and 21 assists in the league demonstrate that, and but too often it has been left to him to try to keep Barca's title challenge on track while the club was going off the rails. Thursday's train wreck was inevitable.

The coaching change in January – Ernesto Valverde out and Quique Setien in– has not worked out. Nor have so many of this season's transfers.

Frenkie de Jong is a qualified success for now and will do better in the future but look elsewhere – Antoine Griezmann, Martin Braithwaite, Junior Firpo and so on – and the scale of Barca's failure to build a proper team around Messi becomes apparent.

The net result is the worst Barcelona side in more than a decade.

Previous president Joan Laporta knew that Barcelona had reached "the end of a cycle" in May 2008. Mistakes had been made,some of them by him, and he felt compelled to rectify them. Sadly, that meant sacking Frank Rijkaard, the man who had led Barca to Champions League glory just two years previously.

The Dutch coach still had a year to run on his contract but Laporta knew it was time for a change. Hehad detected signs of the team's decline the previous year but decided to stick with a man he respected immensely.

However, when Barca suffered a humiliating 4-1 rout at the hands of Real Madrid at the tail end of a second consecutive season without a trophy, Laporta knew he had to stop the rot. Relieving Rijkaard of his duties wasn't easy, of course.

"It was a very emotional moment," Laporta admitted at the time. "It was difficult for me to find fault with him."

It was the right call, though. Barca needed an overhaul and Laporta put former midfielder Pep Guardiola in charge of the revolution. The results were spectacular, with the devoted disciple of Johan Cruyff ushering in the most successful era in the club's history.

Laporta's daring decision to entrust the senior squad to the B team coach wasn't just a key moment in Barcelona's history; it changed the entire course of football history. The Catalan restored the club's identity and style, making 'tiki-taka' a part of the footballing lexicon.

Guardiola jettisoned the likes of Deco and Ronaldinho and instead built a team around Messi, Xavi and Andres Iniesta, complementing them with fellow La Masia graduates Sergio Busquets and Pedro.

Twelve years on, another clear-out is required at Camp Nou. Barca are wrapping up their worst Liga campaign since 2007-08. Not since Rijkaard's final season have the Catalans won so few games, registered so few points and scored so few goals.

It was actually something of a surprise that they were still in title contention until the penultimate round of games –Barca's performances have been as underwhelming as their results. The hope was, of course, that Setien, as an advocate of Cruyffian principles, would get Barca looking like their old selves again.

Valverde may have had the club on course for a third consecutive Liga title when he was sensationally dismissed in January but he was never popular with the fans because of his pragmatic approach. Sacking him was undoubtedly a mistake, though. It looked like a bad move at the time; it looks even worse now.

Setien arrived promising to play attractive football; he has failed to deliver, spectacularly. His side have arguably played just one good game, against Villarreal, since he took over. Not even Tata Martino's Barca have performed this poorly – and that's saying something.

To pin the blame for Barca's Liga collapse solely on Setien would be folly, though. The club has been in utter disarray at boardroom level for months and the constant state of chaos has directly affected the playing squad.

The failed pursuit of Neymar; the Barca-gate social media scandal; the need for an emergency signing in February; the dispute over pay cuts – Messi & Co. have had to deal with one distraction after another.

Everything essentially unravelled during the lockdown. While the break brought champions Madrid closer together, Barca fell apart. It's no wonder, then, that an agreement with Messi over a contract extension beyond 2021 is now in doubt.

Laporta, of course, is now playing the political game when he says that he is "scared" that the captain could leave. The former president is edging ever closer to running for re-election when Josep Maria Bartomeu stands down and isdoing his utmost to apply pressure on the current incumbent.

But Bartomeu's position was already perilous before Laporta re-entered the fray. There were calls for him to resign as far back as February and his stock has only fallen further in the interim.

He is adamant that Messi will stay at Camp Nou and that Barca will be a major "mover" in the transfer market this summer, even though the club is in poor economic shape because of one disastrous signing after another since 2015.

Indeed, it is telling that Barca were last year entertaining the idea of signing both Neymar and Lautaro Martinez. They can presently sign neither.

Fans will take some comfort in the emergence of Ansu Fati, RiquiPuig and Ronald Araujo from La Masia this season but they remain baffled by the decision to swap Arthur for Miralem Pjanic, who is seven years older than the Brazilian. Another thirty-something for a squad well past its sell-by-date.

Such a bizarre recruitment strategy explains why Setien took over an ageing, unbalanced squad – and why Barca only had five outfield players on the bench at Real Valladolid last weekend.

So, the coach was right when he said this week thathe should only take some of the blame for Barca's disappointing season – not all of it.

Bartomeu needs to take responsibility for his role in the team's decline since winning the Champions League in 2015. Instead, he has pathetically pointedthe finger at VAR decisions for swaying the Liga title race in Madrid's favour.

And the reality is that if Barca are to have any chance of restoring stability ahead of the conclusion of the Champions League, Bartomeu needs to look at himself.

Like Laporta back in 2008, he needs to admit that massive mistakes have been made, and that he is responsible for some of them; arguably most of them.