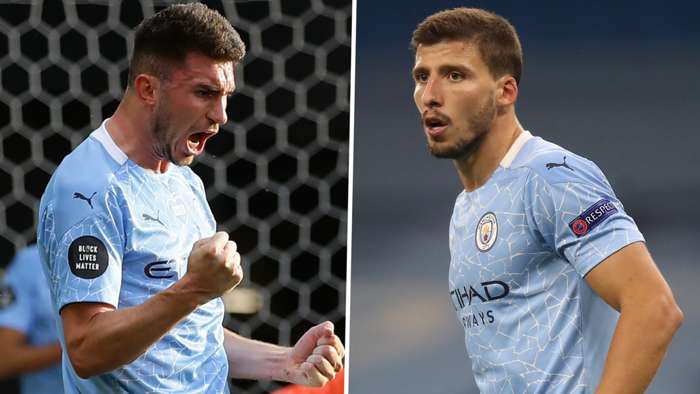 What a time, then, for Liverpool to arrive at the Etihad for a massive Premier League showdown!

Since the humiliating 5-2 defeat at home to Leicester on September 27, City have played seven games, lost none and conceded just three goals, with Michail Antonio’s brilliant overhead kick for West Ham the only goal conceded in the past 435 minutes.

So much of that success is down to the emerging central defensive partnership of Aymeric Laporte and September signing Ruben Dias.

City have conceded just once with the pair positioned at the heart of the backline but this weekend they face their biggest examination to date, as they tackle a Liverpool forward line so brimming with attacking talent that Diego Jota may have to settle for a seat on the bench, even though the Portuguese netted a hat-trick in a 5-0 demolition of Atalanta in midweek.

While Guardiola insisted there are at least half a dozen clubs in with a shout of this season’s coronavirus-impacted title race, City and Liverpool remain the top two in England.

However, their relative strengths have almost been reversed since the last time they met, in July, when City won comfortably 4-0 to smash a sizeable dent in Jurgen Klopp’s hopes of breaking their Premier League points record.

Then, City’s attack was the most potent in England, going on to break a century of goals for the second time in three years as the league’s highest goalscorers for a third successive season.

Liverpool, meanwhile, had the meanest defence for a second consecutive campaign, one built on the uncompromising leadership of Virgil Van Dijk, as the Reds claimed their first English title in 30 years.

But injuries and new signings have turned everything on its head.

A cruciate knee ligament injury has ruled Van Dijk out for much, if not all, of the season and Liverpool have already conceded 15 goals – more than any other team in the league at the time of writing bar West Brom (16) and Leeds (17).

At the other end of the pitch, though, only Tottenham and Chelsea have more Premier League goals than the Reds, who have struck 17 times in seven outings.

City, on the other hand have just nine goals from their opening six games – their worst return since Roberto Mancini was in charge – but do have the joint-second tightest defence in the Premier League, with just eight goals conceded.

Shorn of the services of striking duo Sergio Aguero and Gabriel Jesus for the majority of the campaign to date, Guardiola's focus has switched to grinding out results, meaning none of the trademark routs that have characterised the Catalan's tenure.

An 18-month search to find a replacement for departed captain Vincent Kompany finally ended with the £62 million ($79m) signing of Portuguese international Dias from Benfica. Strong, intelligent and a natural leader, the 23-year-old has settled remarkably quickly.

In key games last season, City crumbled, particularly when they were without Laporte, who missed six months with a knee injury. Back-up defenders John Stones, Eric Garcia and Nicolas Otamendi, now with Benfica, looked fragile and lacked confidence when put under pressure but Dias has brought authority to the backline.

In last weekend’s 1-0 victory over Sheffield United, the Blades created one golden chance when Joao Cancelo was weak in a challenge before John Lundstram fired narrowly over.

The full-back was told in no uncertain times by his Portuguese team-mate Dias that his defending wasn’t good enough and City eventually dug in to secure a narrow win.

Alongside him, Laporte has been one of the best defenders in the Premier League since he joined from Athletic Club in January 2018. Indeed, it was overlooked how miserly City’s defence was during their two title successes under Guardiola.

In the Centurions season, they had the best defence and the following year conceded just one goal more than Liverpool, so while Kompany’s departure left a huge hole, Dias' arrival means that City have the beginnings of what could be a new fierce and formidable defensive pairing.

“These guys give us consistency,” Guardiola said. “We struggled a lot last season without two central defenders. Of course, we will need everyone because of the amount of games. It's impossible to play both every game."

In a packed schedule, Guardiola will want them fresh for his biggest games, so it was no surprise to see both rested for the win over Olympiacos.

Now, though, the onus is on them to pass the ultimate test.