The 'new Pogba', the 'Moroccan Messi' & the 'tiny madmen': The Barcelona wonderkids aiming to follow in Fati's footsteps
Match

The 'new Pogba', the 'Moroccan Messi' & the 'tiny madmen': The Barcelona wonderkids aiming to follow in Fati's footsteps 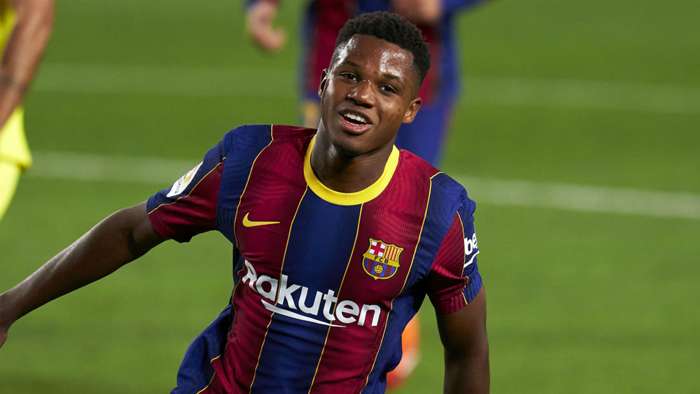 Given what they have gotten used to over the past half century, it is fair to say that the past 18 months have been a little rough for Barcelona supporters.

On the field, expensive new signings continue to flatter to deceive. It is clear that the Camp Nou outfit have now fallen behind Real Madrid domestically while their 8-2 defeat at the hands of Bayern Munich highlighted just how far they are off being one of the top teams in Europe once more.

And while there is largely a feeling of doom and gloom around the Catalan giants, the promise of an academy graduate finally making the grade within the first team is offering a glimmer of hope for the future.

The emergence of and continued improvement shown by Ansu Fati at Barcelona suggests that the 17-year-old forward does have what it takes to help fill the void whenever Lionel Messi does eventually exit the stage.

Already a full Spain international, Fati has broken countless records since making his debut for the Blaugrana at the start of last season, with his performances in the opening weeks of this campaign illustrating that he is ready to take the next step.

With four league goals to his name this term he is currently the joint-top scorer in La Liga while on matchday one of this season's Champions League group stage his strike against Ferencvaros saw him become the first player to score more than one goal in the competition before their 18th birthday.

It now seems certain that Fati will become the first La Masia graduate to hold down a regular spot in the Barca first team since Sergi Roberto, with the club's famed academy having come in for criticism in recent years after a number of top talents opted to leave in a bid to earn first-team opportunities elsewhere.

There is now hope, though, that Fati is set to lead a new generation of homegrown players that can form the backbone of the future Barcelona team just as Messi, Andres Iniesta, Xavi and Sergio Busquets did during the club's glory years under Pep Guardiola.

The next cab off the rank in terms of players capable of becoming a first-team regular in Catalunya is 17-year-old midfielder Ilaix Moriba, who is already a regular in Barcelona's 'B' team that play in the third tier of Spanish football.

Regularly likened to Paul Pogba due to his superb passing ability, physical prowessand eye for the spectacular in the final third, Moriba moved to La Masia from Espanyol in 2010 and has consistently impressed his coaches over the past decade.

The teenager has already trained with the Ronald Koeman's squadthis year, and many are hopeful that Moribawill be able to form a fearful midfield trio alongside Frenkie de Jong and fellow teenager Pedri, who has impressed since joining from Las Palmas this summer, over the course of the next fiveyears.

Moriba, though, is not the only player born in 2003 to start out at Espanyol before moving to La Masia, with left-back Alejandro Baldehaving emerged as a potential successor to Jordi Alba over the course of the past few seasons.

Originally a striker, Balde has slowly been moved back towards defence, though his attacking instincts remain, making the pacey youngster the perfect modern full-back and potentially a player who can build a strong relationship with Fati down the left-hand side.

The real excitement around La Masia, however, is centred around a generation of players born in 2004 that many close observers believe could go onto define the club for years to come if their development continues at its current pace.

The leader of the group is forwardIlias Akhomach, who at 16 is already closing in on a competitive debut for Barcelona 'B' having made his first appearancefor the reserve side during pre-season.

It is understood that when Barca academy director Patrick Kluivert told Cadena SERin November that "in La Masia we already have the new Messi", he was speaking of Ilias, who is left-footed and able to play in any position across the forward line, much like the six-time Ballon d'Or winner.

Originally released by Barca when making the transition to 11-a-side football, the teenager now dubbed 'The Moroccan Messi' due to his north African heritageturned down an offer from Real Madrid toreturnto La Masia in 2017and has been a standout performer ever since.

If Ilias is the archetypal forward player that La Masia tends to produce, then when it comes to midfielders they specialise in those who are comfortable in possession and able to maintain the tempo of a game with their passing, and their current crop of Under-17s has an abundance of those kind of players.

The most highly-rated among them right now is Pablo Paez, otherwise known asGavi.

Signed from Real Betis in 2015, Gavi is most comfortable playing as a classic No.10, though he has shown he is able to adapt to play as part of a three-man midfield as Barca look to adopt their usual 4-3-3 formation throughout their academy structure.

Naturally most at home in the final third, the 16-year-old has been likened to Andres Iniesta by some, with it felt he can develop into a similar kind of player as the legendary World Cup winner.

Since arriving in Catalunya Gavi has formed a midfield trio alongsideAleix GarridoandAdria Capdevila that Spanish newspaperSportdubbed 'The Tiny Madmen'.

A natural leader, Garrido has been with Barcelona since the age of eight and has captainedthe clubat various youth levels while Capdevila, whose role tends to mirror that of Busquets in the first team, was a regular winner of 'Player of the Tournament' trophies during his early years at La Masia.

The latter, though, has struggled to impose himself physically on games in recent years, with the arrival ofBiel Vicensfrom Girona in 2018 having pushed Capdevila down the pecking order somewhat.

Others born in 2004 who look set to destined for first-team opportunities in the next three to four years include centre-backDiego Almeida, who has already been called up to Spain's U17 squad despite having only turned 16 in February, and goal machine Angel Alarcon, who is capable of playing off the left-hand side or as a central striker.

It would be a shock if at least one or two from that group of players donot go onto join Fati in the Barca first team, but there are some at an even younger age who those inside La Masia are getting very excited about.

Lamine Yamal is only 13 but has already been likened to Messi while one journalist described him as "the best player to play seven-a-side football for Barcelona in years".

Even younger than him is 11-year-old Michal Zuk, who has already amassed over 60,000 followers on Instagram and signed a contract with Adidas at the age of nine having impressed ever since he was enrolled into La Masia in 2016.

Time will tell to see if they can deliver on their promise, but there are signs that La Masia's reputation for feeding the Barcelona first-team with world-class talents is being rebuilt.