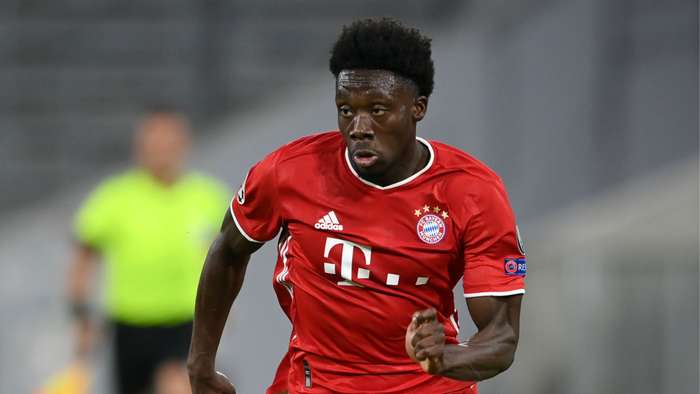 There is perhaps no challenge more daunting in footballthan facing off againstLionel Messi. The Argentine star is regarded as an all-time great for a reason: He's made a career out of scoring big goals while embarrassing defenders along the way.

"Should Messi play on his left side, Alphonso will take care of him," Rummenigge said.

It was both a vote of confidence and a pressure-builder. Davies, still in the midst of his first full season in Europe, was now a target for a player that many see as the best to ever play the game.

But, as the final whistle sounded on what was a historic result, Rummenigge's words seemed somewhat prophetic. Davies did, in fact, take care of Messi.

Frustrating the Barca star throughout Bayern's incredible 8-2 victory,it was Davies that routinely embarrassed defenders and it was Davies that, when all was said and done, looked like he may just be the best in the world —at least at his position.

It was a match that served as a continuation of Davies' rise. Defensively, he flustered Messi time and time again, even forcing the legendary winger to chop him down after beating him for pace. And, on the attacking end, he created an incredible goal all on his own, completely undoing Nelson Semedo and the rest of Barca's defence before setting up Joshua Kimmich for one of the simplestfinishes he'll ever have.

That performance against Barca, and the subsequent triumph over Lyon, have only further increased Davies' reputation as one of the best young players on the planet.

In less than a year, the 19-year-old has gone from up-and-coming prospectto a vital piece for a team set to compete for a Champions League title. You could call it a meteoric rise, but even that might be an understatement and, to be honest, Davies would probably outrun the meteor, too.

It's that much-discussed pace that brought Davies into the spotlight, with Thomas Muller calling the Canadian "the FC Bayern Road Runner"earlier this season. And it's that ability to hit the 'meep, meep' stage of speed that made him a standout whenhe firstpopped up with the Vancouver Whitecaps.

From the moment that Davies burst onto the North American scene with the Whitecaps, it was clear that he was something special. A highly regarded winger with unbelievable physical gifts and a mentality to match, Davies became theyoungest player signed to a USL contract at 15 years and threemonths when he joined the Whitecaps' second team. He made his MLS debut before his 16th birthday -becoming the second-youngest player in MLS history behind only Freddy Adu.

It didn't take long for big clubs to come calling. Despite MLS, and Canada in particular, not being a hotbed for prospects, Davies was different. He was far and away the Whitecaps' best player and had quickly become one of the league's most dynamic attacking talents. He could go on lung-busting runs and routinely went right at seasoned professionals, showing no fear once taking the leap from the academy to the professional game.

"Alphonso Davies is off to the races..."

There were growing pains sure, and his decision-making in the final neededsome work, but it was easy to see why the likes of Manchester United, Chelsea and Liverpool were reportedlyinterested.

Eventually, Bayern won out and, with hindsight as a guide, what a move it was. In Davies, Bayern added a player that we now know has limitless potential and plenty of years left at the top level to fulfil it. And, in Bayern, Davies found a club that was willing to get creative and weaponise him however possible.

At first, that creativity was born out of necessity. Davies, by all accounts, was brought to Bayern as a winger. But, with David Alaba needed at centre-back following a string of injuries, the Canadian was given a chance at left-back. He had some experience in the position with the Whitecaps, but there's a big difference between playing left-back in MLS and doing so at Bayern with titles on the line.

It turned out to be a perfect fit. Davies has been able to make up for defensive lapses with his mind-numbing pace and, as the season has gone on, those lapses have become few and far between. You don't stop Messi with just pace; you do it with a combination of speed, skill and timing that few fullbacks on this planet have.

When Bayern bought Davies in a deal that could be worth up to€18 million (£16m/$22m), they didn't expect it to end up like this. That deal, if anything, looks like one of the biggest bargains in recent years, as Bayern would have little problem getting triple that now if they so desired, even if he does play a position that doesn't tend to command big-money deals.

The question is if Davies will be a fullback for very long. It's a conversation that the Canadian national team is jostling with every time they convene. Is Davies too talented to be held back in defence, or should both Bayern and Canada count their blessings that they've stumbled into something special with this game-changing fullback?

Davies wouldn't be the first fullback to be moved forward after breaking through. Gareth Bale did similar at Tottenham, going on to be one of the world's elite wingers with both Spurs and Real Madrid. Former Whitecaps manager Carl Robinson has already compared Davies to his fellow Welshman, while also adding that there is a bit of Ryan Giggs in the Canadian's game.

“His positioning and footwork will improve with experience, but Ashley Cole at the same age wasn’t the perfect defender and Gareth Bale at 21, playing as a left-back turned into awinger atTottenhamhad developing to do too," Robinson said.

"Alphonso has a kick-start on these boys because he’s playing at such a high level, a year or two before them."

Still, the Canadian star's future could very well be in defence.In Davies, both Bayern and Canada have the perfect modern fullback. The position has changed entirely over the last handful of years with a different focus and a different skill set required. Gone are the days where fullbacks' primary focus was on staying back and defending. The modern game calls for wide defenders to be able to contribute in attack as often as possible.

Perhaps no team is better at doing so than Liverpool, where Trent Alexander-Arnold and AndyRobertson practically play as pseudo-midfielders. The two push high, create mismatches and provide goals, whether by assisting or scoring on their own.

Yet, even Robertson, a player many see as one of the most dynamic left-backs on the planet is quick to admit that Davies may just be the most dangerous fullback out there right now.

"I think Alphonso Davies, already world-class but he can only get better," Robertson toldBT Sport following Bayern's demolition of Barcelona.

"Don’t expect me to be doing that Davies' assist vs Barcelona any time in a hurry. That was just incredible. It probably took five or six of them out of the game with one passage of play."

Another keen admirer: Marcelo, a player widely credited as the top left-back of this era. For years, Marcelo has been the benchmark, a regular in virtually every player or pundit'sdream XI from the past decade. He's one of the best to ever play the position, and he has a trophy cabinet to prove it.

But even the Real Madrid defender has found pleasure in watching Davies' rise, replying to the Canadian on Instagram:"You bring joy to my eyes when I see you play kid!"

Two cosigns from two Champions League winners, and Davies may soon be among them. Bayern will have their own chance to win Europe's ultimate prize this weekend against PSG and, if this tournament run has been any indication, Davies will once again be a vital part of Hansi Flick's plans.

After his latest breakthrough performance, asthe whistle blew on Bayern's Barca battering, Davies approached the man he was charged with neutralising. He wanted Messi's shirt, a keepsake to remember on a night he took down the world's best.

"I asked for it but I think he was a little bit upset," Daviestold BT Sport. "It's OK, next time hopefully."

There may never be a next time, not with Barca crumbling and Messi's future anything but certain. There are no guarantees in this sport, especially when it comes to the top level. Davies may never get the chance to go toe-to-toe with the great Messi again.

But that moment won't be Davies' last in the spotlight. While one era may have moved towards its inevitable end on that day in Lisbon, another may have just gotten going. Because, if this season has taught us anything, Davies' reign as the world's best left-back is only just beginning.