'The U.S. is my home' - Reyna shuts down reports of England call-up 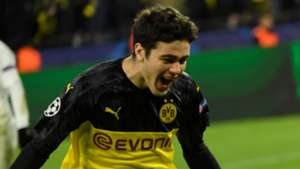 Borussia Dortmund midfielder Giovanni Reyna says he only wants to play for the United States and will not switch allegiance to England.

Reyna, the son of former Rangers and Manchester City midfielder Claudio and ex-USWNT player Danielle Egan, is eligible to play for England - the country of his birth - and the U.S. - where he was raised - as well as Argentina and Portugal due to his grandparents.

The Durham-born attacking midfielder has impressed since his Dortmund breakthrough this season, having made nine appearances for Lucien Favre's team.

Reyna made history when he came on to score against Werder Bremen in the DFB-Pokal last month and he went on to assist Erling Haaland for the winning goal against Paris Saint-Germain in the Champions League.

His bright performances have raised speculation that England could try to convince him to play for the Three Lions, but USA coach Gregg Berhalter said last month that the 17-year-old would be included in the team for their March matches against Netherlands and Wales. He is also expected to make the squad for the 2020 Olympics in Tokyo.

The teenager, who has played for the U.S. at Under 15s, 16s and 17s, was asked if he could opt to switch to play for another country, but he confirmed he has his heart set on representing the USMNT and is excited about the prospect of a call-up.

"It's very clear to me: I just want to play for the U.S. national team. This is my home," he told Ruhr Nachrichten.

USMNT general manager Brian McBride was full of praise for the youngster this week, telling Bundesliga.com that he is excited to see him represent the team.

"You're 17, and you're able to make a jump from youth national teams to U23s of a Bundesliga team, and now you're in the Champions League and making a difference," he said.

"His growth factor is exponentially greater, then I think most people thought. If you look at player like Gio, certainly his pedigree with with his Dad, you know he has the mentality.

"The fact that he's now showing it with the technical side, we're really happy for him. We're excited to see him with [the USMNT], but also really excited to see what lies ahead for him."