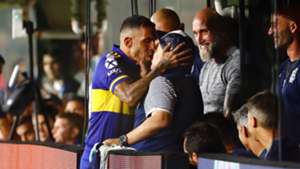 Tevez scored a 72nd-minute winner to lift Boca to a 1-0 victory over Maradona's Gimnasia y Esgrima La Plata and to the title after River Plate's drew 1-1 at Atletico Tucuman.

The forward kissed Maradona on the mouth before the encounter and later said he was seeking luck, while he also praised Boca's second vice-president Juan Roman Riquelme.

"Roman is very important, it was very clear from the first talk. He also helped me a lot to find that Carlitos, this is the reward," Tevez said, via Ole.

"Roman in the box, me making a goal.

"I knew I had to kiss Diego, I was lucky that way...sometimes you have to look for luck."

Gimnasia goalkeeper Jorge Broun was unable to keep out Tevez's 20-yard effort for what proved to be the winner.

Tevez, 36, said he was desperate to deliver success for Boca, who moved onto 34 titles - two shy of River's all-time record of 36.

"I was hungry for glory again. I think I felt again that I had to go back to my neighbourhood, that I had to get off a lot of things and fight like the kid who fought when I was a kid," he said.

"It was two or three years of fighting against my head, against a lot of things. I always kept working, trying to get out of that well, it was very difficult for me to get out, to get back to my roots.

"It was as I was telling you, I needed to go back to be hungry for glory. I found myself at the right time."

Tevez ended the regular season with nine goals from 17 appearances and is coming off contract at the end of June.

The former Argentina international began his senior career with Boca in 2001 as a 16-year-old and his latest success 20 years later might mark the perfect time to hang up the boots.

While the league season has finished, Boca still face a busy few months as they compete in the group stages of both Copa de la Superliga and the Libertadores.

Boca ended the Superliga season with 14 wins from their 23 games, losing just three times as they pipped River Plate to the domestic title.

The club also remarkably conceded just eight goals during their league campaign - six fewer than the next best defensive record.