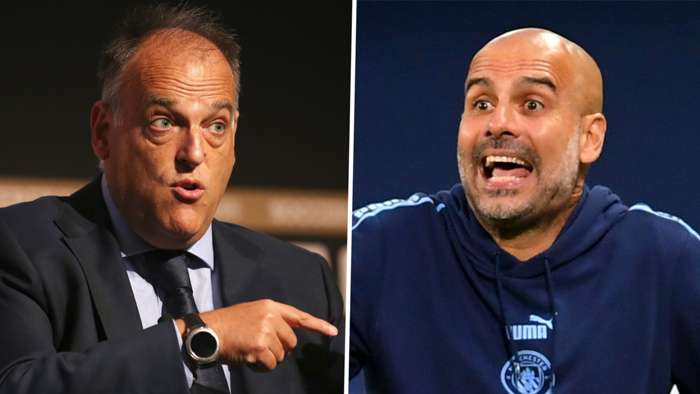 Pep Guardiola has slammed La Liga president Javier Tebas for his comments on Manchester City's Court of Arbitration for Sport (CAS) appeal verdict, insisting he "must be so jealous".

The Blues swiftly announced their intention to contest the ruling, and have faced an anxious wait for a reprieve over the last five months with the case hanging over their 2019-20 campaign.

CAS finally announced that City's suspension was lifted on Monday, and reduced the club's financial penalty down to €10m, sparking a fierce debate over the current state of FFP regulations.

Tebas has been among those to criticise thedecision , as he told reporters at the start of the week: “We have to reassess whether the CAS is the appropriate body to which to appeal institutional decisions in football.”

Guardiola responded directly to the Liga chief in a press conference ahead of his side's home clash with Bournemouth on Wednesday, insisting those in charge at Etihad Stadium are judged unfairly in comparison with officials at other top clubs.

The City boss said: "This guy must be so jealous, he’s an incredible legal expert, next time we’ll ask them which court should judge us.

"There has to be worry and concern about La Liga on focus on them. These kinds of people, when it’s good for them, it's perfect, but if it's against them, it’s a problem for the others.

"We’ll be in the Champions League next season, Mr Tebas. What we did, we did properly."

Guardiola went on to dismiss the notion that City's recent success all boils down to their financial power, while arguing they deserve more respect for their achievements after doing everything in "the right way".

"We deserve to be here, we deserve to be stronger, we have incredible people working in this club to make our fans proud and we don’t have to ask permission to be there," said the Catalan.

"When we lose, I shake their hands and congratulate them, all the time we have done it. Guys, accept it, we wanted to be here and we tried on the pitch.

"If you do not agree, knock on the door and speak to our chairman and chief executive, don’t go whispering. We invested a lot of money but we did it in the right things.

"We are not banned, we followed the rules for FFP as they decide. If not, we’d be banned. We’ve done it properly in the right way, UEFA say we do it and we do it.

"People have to understand right now that we are here to try to compete on the pitch at the same level as the elite clubs in the Premier League and Europe."

When asked if City will do their talking on the pitch amid the ongoing controversy surrounding the CAS verdict, Guardiola answered:"Of course, we’ve done it for the last four years, we respect our opponents and try to beat them. We were damaged and we have shown the allegations were not true, now people have to be happy.