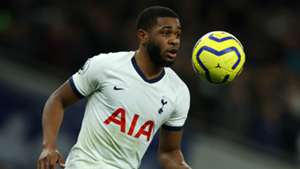 Tottenham defender Japhet Tanganga has admitted that he broke down in tears ahead of his Spurs debut against Liverpool.

The 20-year-old started and played the full 90 minutes at right-back in the 1-0 home defeat at the hands of the runaway Premier League leaders.

And the young Englishman has revealed that his emotions got the better of him just before he made his first senior league appearance for the north London club.

Tanganga told talkSPORT: "On the Tuesday of that week [Jose Mourinho] asked me: 'Do you want to play on Saturday?' I said yeah and he said: 'Are you sure you won't' be scared?' I said 'nah'! He said: 'Okay'.

"Then we worked on the shape in training on Wednesday and Thursday and from there I thought: 'Okay, I'm actually playing'.

"Leading up to the game on Saturday I was really nervous, having sleepless nights and just thinking it could go well, it could go bad, all sorts of things were running through my head.

"On the day of the game when I woke up I had a bit of a tear-up, I was emotional, overwhelmed, I was finally going to make my Premier League debut!

"But once I got to the stadium and did the warm-up I was switched on. I wasn't nervous coming up against Salah or Mane, I was just focused on doing what the manager wanted me to do."

Tanganga impressed sufficiently in that game - despite the final result - to convince Spurs boss Mourinho to use him in a further four Premier League fixtures, as well as three FA Cup games.

Despite being a centre-back by trade, Tanganga has often been utilised as a full-back on both sides of the defence as he is introduced to the rigours of top-flight football.

"I actually didn't grow up supporting Tottenham when I was a little boy," Tanganga continued.

"I grew up with my dad watching Man United and I always used to see them on the TV when I was young.

"Vidic was immense. He is someone I look up to, especially with the position I play. For me, Vidic was the one.

"But once I signed and was around here every day, I just grew to love Tottenham. I loved watching them play, going to games and seeing them, so they became my favourite team."