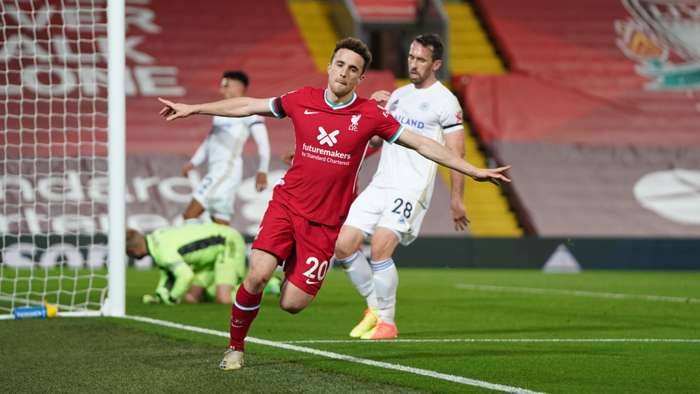 Liverpool star Diogo Jota has been praised by Danny Murphy for giving Leicester "nightmares" in a Premier League clash on Sunday.

The 23-year-old now has eight goals to his name from 12 appearances in all competitions for the Reds, who forked out £45 million ($60m) to bring him to Anfield from Wolves in September.

The Portuguese was deployed on the right of a front three alongside Roberto Firmino and Sadio Mane against Leicesterin the absence of Mohamed Salah, and showed off his versatility by switching from wide to central positions throughout the 90 minutes in order to create openings in the final third.

Murphy was hugely impressed bythe former Wolves star's latest performance, and says he "deserves credit" for the way he has seamlessly integrated himself into Jurgen Klopp's set-up.

“Diogo Jota, talk about hitting the ground running,” the former Liverpool midfielder said on the BBC'slatest Match of the Day episode.

“He was all over the place. He started on the right of the three, where Salah plays normally, drifts into the holes into the centre of the pitch, because he’s so desperate to get on the scoresheet and make an impact on the game.

“He mixes his game up well, dropping deep, linking up the play. And what I like about him is the amount of runs he makes off the ball, which is what all good players do.

“And it’s also the fact of his bravery to go and find spaces, wait, and the intensity of his runs.

“He keeps getting in there, he’s a brilliant option, another source of goals for Liverpool and he deserves credit for how he’s adapted. For any defender picking him up, it must be a nightmare.”

Jota will be back in contention for a place in Klopp's starting XI when the Reds play host to Atalanta in a Champions League group-stage encounter on Wednesday.