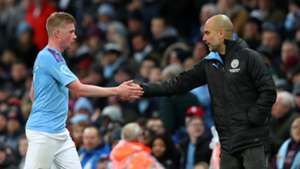 Pep Guardiola has hailed Kevin De Bruyne as an "exceptional" player but says he has to remind the Manchester City star to keep things simple on the field.

The Belgium international tops the Premier League assist chart this season with 16 from 26 appearances, adding eight goals to his name along the way.

De Bruyne, 28, played a key role in his side's 2-1 win at Real Madrid in the first leg of their Champions League last-16 tie on Wednesday when he assisted Gabriel Jesus for the equaliser 12 minutes from time.

And Guardiola has been left in awe of the former Chelsea and Wolfsburg star's performances, saying he sees things no one else can see.

"It's not necessary for me to say absolutely anything about Kevin any more. I'd just say: 'Take a look at how he plays'," the coach said.

"The performance level, the continuity, the influence in our final third and on our finishing, the desire, his calmness and positivity. I mean, I asked him: 'Kevin, what did you feel before you took that penalty?' and he just said: 'I'm going to score'.

"He doesn't feel much pressure, he likes to play in the big events, he's an exceptional player.

"I say to him: 'Kevin, don't forget, do the simple things properly'. Sometimes he's alone and might lose the ball.

"He's able to see something special and you have the spaces no one else can see but even with that he's improving and improving.

"He's not 33 or 34. He's still a lot of years to play and always you have the feeling when he's on the pitch that he's never disconnected, even if he's not influencing the game at that moment. It's important to be like that."

He added: "Honestly, with these types of players , the challenge comes from inside themselves. If you have to push them to be something special they are not big, big, big. I don't like players who complain. If a guy wants to be better than he already is then it is up to him.

"I don't believe too much in trying to seduce them to become better players. They all know what it takes to improve - so it has to come from them. The big things in sport always come from inside the players. Not the trainers. The one detail that all the best players have is to never complain. They don't complain to the manager, the club, because they know it is up to them to become better day by day.

"The others, they are the ones who make reasons why they can't do it. That's why they change clubs all the time and never end up with a top club. The big players always look at themselves.

"Unfortunately, when Kevin helped us get 100 points he still wasn't good enough to be the best player in the league. Maybe in the future."