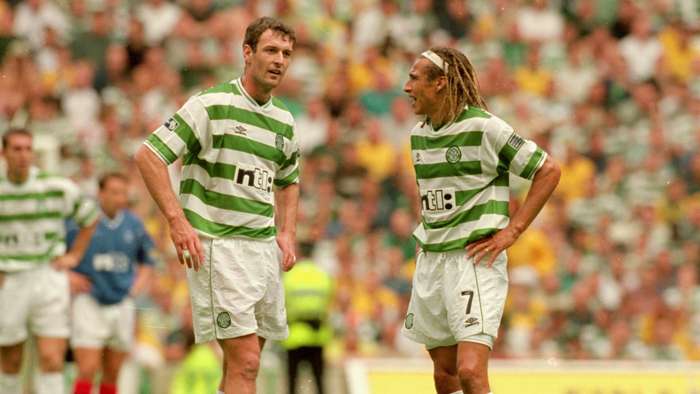 He played alongside the likes of Samuel Eto’o, Ronaldinho, Wayne Rooney and Zlatan Ibrahimovic during his career, but for Henrik Larsson the best strike partner he ever had was Chris Sutton.

Sutton joined Celtic from Chelsea in the summer of 2000 and went on to form an effective strike partnership with Larsson for four trophy-laden seasons.

During that time, under the management of Martin O'Neill, they helped the club win three Scottish Premiership titles, two Scottish Cups and two Scottish League Cups. They also reached the 2003 UEFA Cup final, where they were beaten by Portuguese giants Porto, managed by Jose Mourinho.

Larsson went on to join Barcelona in the summer of 2004 and was part of the side that beat Arsenalto win the Champions League two years later. He also enjoyed a short spell at Manchester United later in his career as well as earning 106 caps for Sweden, featuring at two European Championships and two World Cups.

He played alongside a host of illustrious forward players in that time, but it is Sutton who stands out.

“Chris Sutton was the best partner I ever had. A big guy with vision who knew how to play the game. He was totally unselfish. He worked very hard, never stopped running and he could score goals. It was easy to play with him. When he went up for a header, I just had to judge where to run.”

Larsson also admits he was surprised when Barcelona came in for him at the age of 32, with the Champions League final victory the obvious highlight of his time in Spain.

“I said I would like to go play somewhere warm. I was thinking of Spain but never thought Barcelona would come in for me,” he added. “I had grown up watching Romario, Michael Laudrup, Ronald Koeman. Being able to sign for them was a dream come true.

“Xavi was good but became even better. Andres Iniesta was a young kid. Lionel Messi was just a young kid.

“The team we had was just fantastic. Training was unbelievable. Ronaldinho, at the time I hadn't seen any other player being able to do the things he did with the ball.

“It the Champions League final was so special. Obviously being in one big final in Seville with Celtic, losing that, that wasn't a nice experience. I still don't really enjoy talking about that.