'Stop mentioning the Watford loss' - Klopp says Liverpool have to focus on improvement, not 'destiny' 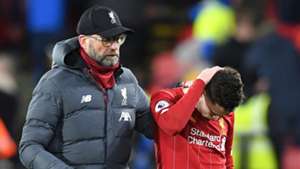 Jurgen Klopp says he doesn't want to talk about his side's defeat to Watford anymore as Liverpool were once again undone by Chelsea on Tuesday.

The Reds lost their first Premier League match of the season over the weekend as Liverpool's winning run was snapped in a 3-0 loss to Watford .

Having also recently lost to Atletico Madrid in their Champions League last-16 first leg , Liverpool were knocked out of the FA Cup on Tuesday as goals from Willian and Ross Barkley helped Chelsea run away as 2-0 winners.

Liverpool have now lost three of their last four games, but Klopp is finished focusing purely on the one that ended the club's historic Premier League run.

Klopp told BBC Sport : "I would really like if you stop mentioning it [the Watford loss]. But we deserved to lose because they scored twice and we made massive mistakes for both goals.

"After that, it was a completely open game. We had three-four shots in a row in the first half and Sadio Mane was close to finishing but the intensity of the game is why we made some changes.

"We needed fresh legs and then it needs to settle a bit but conceding does not help. The boys reacted well, I liked it but the second goal is a problem and Chelsea defended physically well.

"We are not unlucky in these moments, we looked good and Adrian made a superb save initially before the first goal. We have to be ready in the moments. We played Chelsea and they play in counterattacks and that is OK, in moments they struggled with us.

"A lot of parts of the performance I really liked. We know we have to improve, it is not about destiny, not about not clicking here or there, it is all about us and we have to take it in the right way.

Liverpool's only wins over the last month have come against Shrewsbury Town, Norwich and West Ham as the Reds have struggled since returning from their winter break.

And, with a second leg with Atletico Madrid looming following this weekend's clash with Bournemouth, Klopp says the club have to refocus and return to form in both the Champions League and Premier League.

"We are not interested in Atletico Madrid, it is all about Bournemouth," he said. "They are fighting with all they have and they did really well against Chelsea.

"Nobody has to feel sorry for us, we will win football games and that is what we want to do on Saturday."