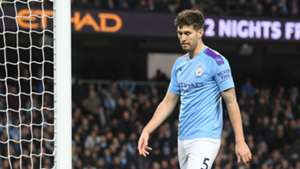 The England international has been thrust back under the microscope after seeing another mistake hinder City's cause in a Carabao Cup final clash with Aston Villa.

Pep Guardiola's side emerged 2-1 victors on the day, but their afternoon would have been considerably more comfortable had Stones not suffered the most untimely of slips.

His inability to clear the Blues' lines handed Villa a lifeline at Wembley - one that they clung to until ultimately being denied by a third consecutive success in the competition for City.

Further questions are being asked of Stones' value at the Etihad Stadium on the back of his latest high-profile error.

It is not the first time that the 25-year-old has found himself in such a position, with over-playing and lapses in concentration having become an all too familiar theme.

Former Blues star Onuoha is, however, adamant that Stones remains a reliable operator and a man who retains the full support of his manager.

"You know, I don't think he [Stones] is a bad player," Onuoha, who stepped out of City's academy to take in 116 appearances for the club, told Love Sport Radio.

"I just think at the moment he's being punished every time - so it's like if you could fall over and the ball could go out of play and nothing happens, but instead he falls over and a great cross comes in and a great header and it's 2-1 and it gives Aston Vila the hope.

"It's just it seems like he's just in a bad patch at the moment, but he's a quality player. And I think if he wasn't, you wouldn't see him playing in the cup final.

"But this is a player who he has trusted in on the biggest occasion. So yeah, I think he's a good player, he just needs to cut out some of the mistakes he's going through at the minute or just find some luck where the mistakes don't lead to big talking points, because you know there are lots of players making more mistakes than him in the league, but we just don't speak about it as much because it tends to not lead to a highlight."

Stones was signed by City for ?47.5 million ($61m) back in the summer of 2016 and has taken in 126 outings for the club - forming part of two Premier League title triumphs, two Carabao Cup successes and an FA Cup win.