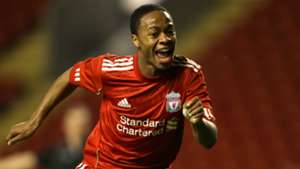 Raheem Sterling says Liverpool retain a special place in his heart, with the Manchester City winger refusing to rule out a future return to Anfield.

The England international departed Merseyside in acrimonious circumstances back in 2015.

Having been given a senior stage on which to thrive by the Reds, Sterling opted against committing to a new long-term contract.

That left a door open for City to steal in and complete a ?49 million ($58m) transfer.

Sterling's decision to head for the Etihad Stadium has been justified by two Premier League titles, a hat-trick of League Cup triumphs and the opportunity to work with Pep Guardiola.

A Catalan coach has taken his game to even greater heights, with the 25-year-old adding the end product to his game which had been missing in the past.

Sterling is now considered to be one of the finest talents in English football, allowing him to spark talk of interest from La Liga heavyweights Real Madrid.

A role could probably be found for him at Liverpool as well were he ever to retrace his steps, and nothing is being ruled out at this stage.

In a Q&A session on Colossal Sports Management's Instagram account, Sterling said: "Would I ever go back to Liverpool? To be honest with you I love Liverpool.

"Don't get it twisted, they are always in my heart. It's a team that did a lot for me growing up so..."

For now, Sterling is focused on furthering himself with City and England.

He has a key role to play for the Three Lions under Gareth Southgate, with a team being pieced together that can rival the so-called 'Golden Generation' from the not so distant past.

That side failed to deliver on a considerable amount of promise, but did boast some of the finest talent that English football has ever produced.

Sterling concedes as much, with the Blues star suggesting that a midfield unit which posed plenty of questions in the early 21st century could be ranked above an iconic trio that delivered World Cup and European Championship glory for Spain.

"Don't get me wrong, [Andres] Iniesta, Xavi and [Xabi] Alonso are unbelievable players and they have won everything but, growing up watching Gerrard, Lampard and Scholes...frightening."