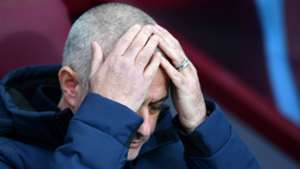 Totteham are posing the "biggest challenge Jose Mourinho has ever faced", says Chris Waddle, with the out-of-sorts Portuguese expected to seek answers to his problems in the summer transfer window.

When handed the reins in north London on the back of Mauricio Pochettino's departure, the former Chelsea and Manchester United boss was expected to lift Spurs to the next level.

That meant landing long-awaited silverware and cementing a standing among the Premier League's top four.

Mourinho is struggling to deliver on either count in 2019-20, with an FA Cup exit at the hands of Norwich coming on the back of inconsistent form in the English top flight.

Injuries have done Tottenham's cause few favours, with the likes of Harry Kane and Heung-min Son stuck on the sidelines, but they are finding out the hard way how much restructuring work needs to be done.

Former Spurs star Waddle told the Racing Post: "Managing Tottenham is the biggest challenge Jose Mourinho has ever faced - but I still think it's too early to judge him.

"He inherited from Mauricio Pochettino a squad who were struggling in the Premier League and clearly in need of a revamp.

"His first job was to instil some belief and get them climbing the table again and he's done that to the point that they are right in the hunt for a Champions League spot.

"Suddenly they have lost two goalscorers and results have started to go against them, they are out of the FA Cup and probably heading out of Europe, and people are questioning Mourinho. But I don't think this is his side yet and you can tell that by the number of goals they are scoring and conceding.

"Everybody thought life would be boring under Mourinho with a lot of 1-0 wins and the bus being parked, yet we've hardly seen that. Goals have been flying in at both ends of the pitch which isn't what we associate with a Mourinho team.

"It's quite possible he has just looked at the squad and thought I haven't got what I need to play the way I would like so I'm going to have to go a different way - almost the old Tottenham way - and now let's just see if we can score more than the opposition.

"He has to get through this season and rebuild in the summer, and I reckon you'll see a proper Mourinho side turning out in August.

"Mourinho hasn't won two Champions Leagues and countless trophies throughout Europe's big leagues without knowing what makes a good team and he will know exactly what is required to transform Tottenham."

Waddle added: "He says he's not looking to change too much, which is out of character for him, and I'm not sure I believe in him.

"He needs a right-back, he needs a centre-back and he needs at least one holding midfielder to add some protection. He also needs another central striker to back up Harry Kane - although if you believe what you read Kane might not be at the club next season.

"I don't know whether that is true or not but it's another potential headache for Mourinho to have to deal with."

Spurs, who have slipped to seventh in the Premier League table, will be back in action on Saturday when they take in a trip to Burnley.