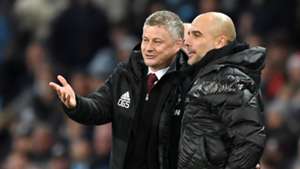 Ole Gunnar Solskjaer says Manchester United need to find the right balance and keep their emotions in check when they take on Manchester City on Sunday.

The two sides know each other very well, with the Premier League set to see the fourth Manchester derby in as many months this weekend.

United have the upper hand having won two of the three meetings so far this season, but Solskjaer is keen for his side to learn from their 3-1 defeat in the Carabao Cup in January, when City were far superior to their hosts at Old Trafford.

"When you're at home, you have to open up against a team like Man City and they will exploit that if you're not 100 per cent," Solskjaer told reporters.

"Sometimes, being at home with your fans, you want to show them what you can do and you want to beat your opponent.

"Sometimes you open up too many spaces and that's what we did for 10, 15 or 20 minutes, whatever we did after they scored a worldie [Bernardo Silva's opening goal in the 3-1 defeat].

"Before then, it wasn't a problem before Bernardo scored in the top corner. So that wasn't an issue until our heads went for a little while, so we've got to control our emotions more. And we have learned so that's an experience that we'll bring into this game, definitely."

Solskjaer also revealed he wouldn't be holding a pre-match video briefing, such is the regularity with which the sides have faced each other this season.

"Four times in a few months, so there's not going to be any video [briefing] tomorrow (Friday) or Saturday because we've played them so many times," he said.

"I think it helps, because my team is still developing. Our team now is developing and you want to play against the best. We need to learn and they've been the best in the last few seasons and, for us, it's a great challenge."

However, he knows City are coming into the game on form, having won five games on the bounce in all competitions.

"They'll feel confident, they've hit form, they're playing well," he said. "They've just been at the Bernabeu, winning there [against Real Madrid] as well, and they won the Carabao Cup final [against Aston Villa].

"So, I'm sure they'll come confident, they'll play their own game and we'll play our game and hopefully it will be a good one.

"Let's hope it is a 4-3 like we've seen before. There have been many classics and we'll do what we can to make it a classic."