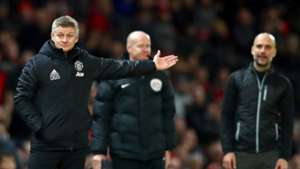 Manchester United boss Ole Gunnar Solskjaer slammed a fixture schedule that has given his team 24 hours less recovery time for Sunday's derby showdown with Manchester City than their rivals.

United progressed to the FA Cup quarter-finals by easing to a 3-0 victory at Derby County on Thursday , a day on from City also seeing off Championship opposition in the form of Sheffield Wednesday to reach the last eight.

Solskjaer suggested this arrangement handed an unfair advantage to Pep Guardiola's side, who have won their past three Premier League trips across town.

"It's that help we get from the FA, that extra 24 hours that they've had," he quipped.

"I cannot believe - there's a derby on Sunday and we've got to play on Thursday night. What's the point in that?

"That doesn't level the playing field. It was the same when we beat them last time, we played Wednesday and they played Tuesday, so we've got to be good at recovering now.

"I don't think we can [complain about it] it's one of those where you get told when you're going to play. We've not got any help before this one."

The victory Solskjaer referred to was a 2-1 triumph at the Etihad Stadium in December that came on the back of a midweek assignment at home to Tottenham.

Indeed, the recent history of this fixture tends to favour the away side.

United were 1-0 winners at City in January - an ultimately futile victory as it failed to overturn a 3-1 first-leg deficit in the semi-final of the EFL Cup, which their neighbours went on to win for a third successive season last weekend.

Guardiola's men ran riot to rack up a 3-0 half-time advantage in the initial game , with some wasteful finishing meaning strikes from Bernardo Silva, Riyad Mahrez and an Andreas Pereira own goal amounted to the Red Devils getting off relatively lightly.

Solskjaer has said his players need to better keep control of their emotions this time around if they are to prevail.

Their task could be made more difficult by the presence of Kevin De Bruyne, with Guardiola revealing in his press conference that the Belgian could be fit to start after picking up a shoulder injury last weekend.