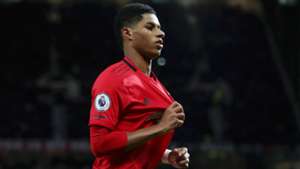 Marcus Rashford is expected to make his return from a back injury late this season in a boost for Manchester United, manager Ole Gunnar Solskjaer said.

Rashford, who has scored 19 goals this season, has been sidelined since mid-January due to the injury.

But amid fears the forward would miss the rest of the campaign, Solskjaer revealed the 22-year-old England international was likely to return late in 2019-20.

"The scan came back quite positive," he told UK newspapers.

"But we will give him the time he needs. He's desperate to come back, of course, but it'll be another couple of months before we see him, probably.

"We can't rush it, but when he is fit he will be stronger for it so when he comes back it's going to be a big boost for us."

While United are fifth in the Premier League ahead of visiting Everton on Sunday, they are in the FA Cup fifth round and Europa League last 16.

Solskjaer said Rashford was eager to return as Man Utdrash chase some silverware this season.

"He's around the place, in the dressing room before games, at half-time. He wants the boys to do well so he can come back and play in the Europa League, the FA Cup final," he said.

"He wants to be there when the business end comes."

According to Lous Saha, Rashford will have "extra motivation" to succeed when he returns to action following his long-term injury lay off.

Saha believes the striker will be chomping at the bit to get back amongst the goals, which will be good news for both England and Manchester United.

"Motivation increases when you have had a bad year or a setback, that's what happened to me. I was watching them playing instead of me, scoring goals instead of me. It's a similar situation when a new striker arrives and you have more competition, you get extra motivation," the ex-United frontman told the Manchester Evening News .

"I feel like Rashford will try to look how he can improve and score goals that are even more important for this club. I have no doubt that if he keeps the mentality that he has shown throughout the last few games he will be even stronger, mentally and physically.

"He is young and all those things can be used as motivation. He needs to take this as an opportunity to learn his game and understand what he can copy from his teammates and what he can do to get even better."