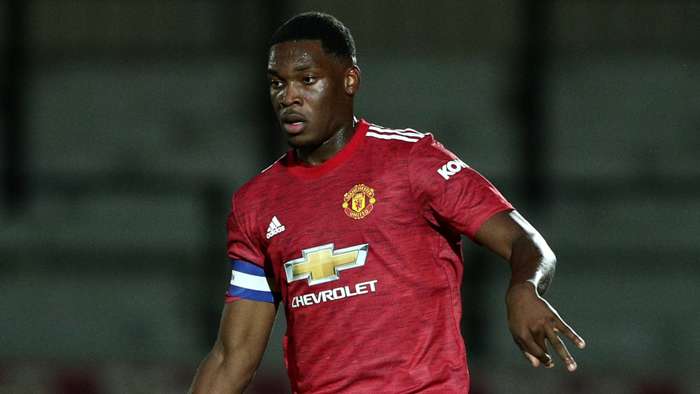 Ole Gunnar Solskjaer has vowed to keep a “pathway” open for Teden Mengi and the other promising youngsters emerging out of Manchester United’s famed academy system.

The promotion of home-grown talent has long been part of the sporting DNA at Old Trafford.

From the Busby Babes to the Class of ’92, United have often looked close to home for inspiration on a first-team stage.

Solskjaer has embraced those philosophies since taking the managerial reins, with opportunities being awarded to those who prove deserving.

Marcus Rashford and Scott McTominay were already established senior stars before the latest change in the dugout was made, but others have broken through under the current regime.

Mason Greenwood has become a full England international at just 18 years of age, while Brandon Williams has seen regular minutes at left-back.

Highly-rated Mengi is among the next generation to be stepping up, with Ethan Galbraith and Anthony Elanga also getting game time in a recent friendly clash with Aston Villa.

Solskjaer will continue to monitor the progress of youth-team hopefuls, with a door being kept open for them to force their way through.

“The whole of the academies in the country must be excited because we lost so many months of valuable time for kids to play. So I'm happy we're back,” Solskjaer told United’s official website.

“I think it's been looking good and there are some interesting and exciting prospects there.”

Asked if the likes of Greenwood and Williams should act as inspiration for those coming up behind them, Solskjaer added: “I would hope so and think so.

“That should always be part of being a Manchester United academy player, knowing the pathway is there.

“We, as coaching staff and as a club, will always give good, young players a chance if they go through the ranks, when you're getting ready to get the chance to have a feel of the first team as well.

“Hopefully, some really improve over the course of the season and get in and around the first team.”