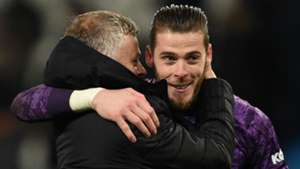 Ole Gunnar Solskjaer admitted David de Gea's mistake for Everton's opening goal in their 1-1 draw with Manchester United was "unfortunate", but praised him for his later saves.

The Spanish goalkeeper hesitated on the ball before lifting a clearance directly into Dominic Calvert-Lewin, who diverted it straight into the net for an early opener.

However, he saved well from Calvert-Lewin moments later before making a superb stop in the dying minutes to deny Gylfi Sigurdsson a winner.

"It's something that happens in football once in a while if you take too long on the ball," Solskjaer told BBC Sport of the early error.

"Calvert-Lewin always chases everything and it's unfortunate that it goes in the goal. We responded and got the goal we deserved."

After De Gea's save from Sigurdsson at the death, Calvert-Lewin fired a shot into the bottom corner for what seemed like the winner.

However, with the Iceland international still sat on the turf by the goal-line, the goal was ruled out by VAR - though Sigurdsson didn't touch the ball, he was adjudged to have interfered with play from an offside position.

"It was a lively end to the game - we thought we could and should have won it and then it was drama at the other end," Solskjaer said.

"David told me he gets distracted because he [Sigurdsson] is there. His save to his right was fantastic - I was 100 per cent sure that would be a goal."

"It was a game of two halves - first half, we were excellent. But a very strange start, you shouldn't be 1-0 down like that.

"After that we played fantastic football and we should have been leading at half time, we could have won it at the end. We defended all the second half and pleased with a point.

"One point each, is what both teams deserve we had the first half and they had the second."

Solskjaer reserved praise for midfielder Bruno Fernandes, who levelled the scores with his third goal for United.

"He's a good player and we have been missing that type of player to do that for us, I'm very pleased with his contribution," he added.