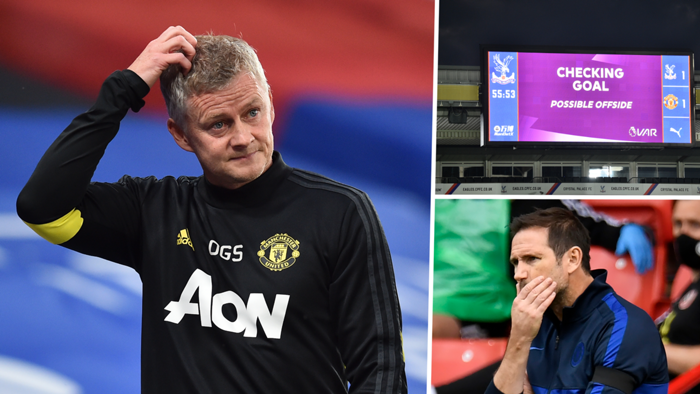 Ole Gunnar Solskjaer has hit back at claims Manchester United have been lucky this season with the number of VAR decisions that have gone in their favour.

Frank Lampard admitted he has concerns that United are getting a run of VAR decisions ahead of the FA Cup semi-final clash at Wembley on Sunday, but Solskjaer refuted any suggestion his side were being favoured and named three examples of decisions which could have cost them.

“I can sit here for hours now and try to talk about this.” Solskjaer said. “It looks like there's a narrative, it looks like people want to influence whoever's making the decisions. I hear people talking about luck, that we've been lucky more than unlucky.

“If you look at the factual decisions, I don't want to sound like a certain manager talking about facts, but if you're offside, you're offside. That's clear. Talking about lucky, the penalty we got against Tottenham in the last minute that was taken away from us, that might be two points for us.

“Talking about the red card Romeu should have had against us when he almost got Mason Greenwood crippled, that should've been a red card, maybe that would've helped us.

“Talking about Mark Noble when he should have been sent off against us when we lost at West Ham, talking about the actual decision that is made that is against Man Utd but is overturned and corrected.

“So it's actually me that should be complaining that we get decisions against us on the pitch by the on-pitch referee.”

The United manager admitted he also wasn’t concerned that Mike Dean and Michael Oliver, referee and VAR controller on Sunday, repsectively, could be influenced by the comments made about his side this week.

“There's a narrative there but we have to focus on our games. We let other people talk about that, I don't want to go too much into it because I might be in trouble,” Solskjaer said.

“I hope I'm not now! I'm pretty relaxed on these and refs are going to be making objective decisions and are not going to be influenced by any emotion in any way, so I don't think they'll read what Lampard said.”