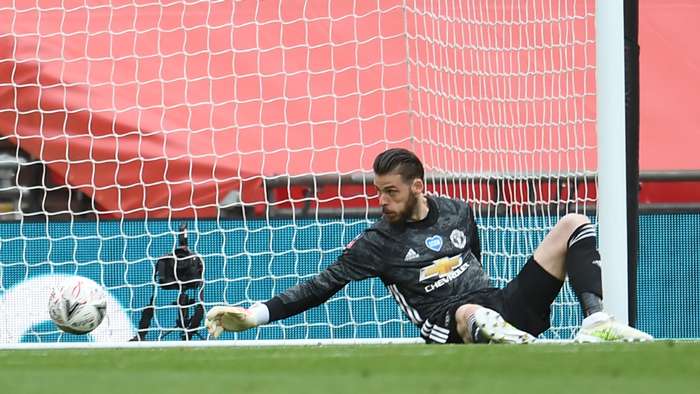 Ole Gunnar Solskjaer has a "huge decision" to make with David de Gea, says Mark Bosnich, who insists that Manchester United can't afford any more mistakes when they play West Ham this week in the Premier League.

The 29-year-old was once revered as the finest shot-stopper in the business, and he was named United's Player of the Year on four occasions between 2013 and 2018, but his standards have slipped under Solskjaer's stewardship.

Basic positioningand handling errors have crept into the Spaniard's game this season, with his latest showing of ineptitudecoming during an FA Cup semi-final clash with Chelsea.

The Red Devils were beaten 3-1 at Wembley on Sunday, with De Gea guilty of conceding two very soft goals fromOlivier Giroud and Mason Mount to set the Blues on their way to victory.

Solskjaer must pick his players up quickly ahead of a vital midweek meeting with West Ham, which they have to win to move three points clear of Leicester and into fourth place.

United will complete their domestic campaign with a showdown against the Foxes on July 27, and Bosnich says the Norwegian boss must now consider drafting Sergio Romero in to replace De Gea in order to ensure a return to the Champions League.

The former Red Devils goalkeeper told Sky Sports: "The only way to get over it is to have another game as soon as you possibly can, to play really well and go again mistake-free.

"HeDe Gea has been absolutely fantastic for Man United over a long period, but in these last eight to 12 months there has been a consistency of errors that we've not seen from him before.

"I know Ole has come out and backed him and done exactly what a manager should do, but the bottom line is with those errors, especially that second one at the weekend, Ole is going to seriously weigh up whether to bring in Romero for the final two games.