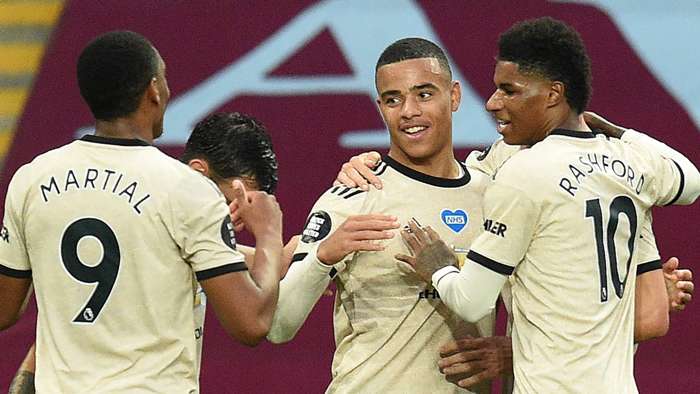 Ole Gunnar Solskjaer has been impressed by the fearlessness Mason Greenwood has shown in attack for Manchester United this season.

The campaign is growing more intense for United as they continue to fight for a place in next season's Champions League and remain in contention for the FA Cup - facing Chelsea in the semi-finals next Sunday - as well as the Europa League.

And Solskjaer is delighted to see the gutsy teenager thriving alongside fellow attackers Anthony Martial and Marcus Rashford.

"I think when you are that age you have no fear whatsoever. Mason goes out there, enjoys playing and does what he does," he toldSky Sports.

"He's done that since he was a kid. He's been in this club his whole footballing life, and he has been taught and coached, but also has taught himself good habits about receiving the ball on the half-turn, if you want to turn a defender inside or outside.

"It's the same with Anthony and Marcus,they all have that type of positive demeanour and mindset. To me, that's football.

"I think the front three did a lot of good work in the lockdown to be physically ready. They are known as technical players, skilful players, but the first thing we always ask for is that mentality and humility to work hard.

"That comes first, and then all their skills and qualities in front of goal come. They create chances for themselves with their pressing and movement, it's not just their skills."

The Norwegian coach also had special praise for United's joint top scorersMartial and Rashford, who have scored 15 goals each in the English top-flight this term.

"I've been very pleased with Anthony. You can see his work rate, his foundation," he added.

"Marcus is still a young boy developing, too. All three of them can see a pass, can play a pass, they can score, they are physical, they can make runs and create chances for others. We are trying to develop them all of the time; this isn't a one-day thing, or a 'sometimes' thing, this is about creating good habits."

Solskjaer is happy with the way his side have been playing since the Premier League's return from its three-month hiatus due to the coronavirus, as they have scored an impressive 14 goals in their last four games.

"In the first two or three moments after you win the ball, can you go forward? Can you go straight at them? If you lose the ball, don't worry about it! You are so close to them, you can win it back," he added.

"It has been so great to see the attitude of: 'OK, I will try, and if I don't succeed I will just go and win the ball back!'

"It's fantastic for me to see them express themselves, because that's a Manchester United team. We need to take chances, take risks, be brave, and most of the time you will reap the rewards if you are brave. We need to keep that mentality and bravery going forward."

He continued: "We went through some difficult spells, especially around that time in October, and the club have been very good with us, they've kept in touch with us and have seen and known what we're doing, and they've believed in what we're doing.