Setien: My relationship with Messi is good

Setien: My relationship with Messi is good 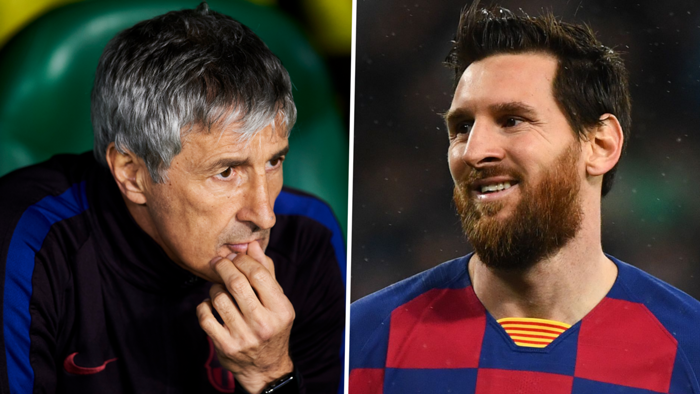 Barcelona boss Quique Setien insisted he and Lionel Messi have a strong relationship after a palate-cleansing thumping of Deportivo Alaves got rid of a bad taste in the mouth.

But now Barcelona are looking forward to their Champions League last-16 reunion with Napoli,buoyed by Sunday's 5-0 win over a shaky Alaves side on the final weekend of the Spanish season.

The European second leg at Camp Nou on August 8 offers Barcelona a chance to reach what is effectively a mini-tournament to be staged in Portugal later in the same month.

Two-leg ties will be abandoned from the quarter-finals and replaced by a straight knockout format.

With Messi scoring twice against Alaves, and further goals coming from AnsuFati, Luis Suarez and NelsonSemedo, Barcelona suddenly sense an opportunity to end the season on a high.

Despite speculation surrounding his position, Setien stressed he and Messi, who is arguably the most powerful individual at the football club, get along well enough to work together.

"It is the same as with everyone,more or less," Setien said."There are players who are more open and have more of a relationship, but the relationship is good."

Messi spoke after the Alaves game and revealed there had been soul-searching talks among the squad since the Osasuna game.

"It is true, that we have hada deep reflection on the situation," Setien said.

"We are all excited about the Champions League. It is true that we have spoken and it has served us well, because some things have been cleaned up.

"It is something that has been backed up with this game and with this result, which will allow us to face the future with more confidence and in a different state of mind."

Setien said it had been a "special" day in the Basque Country, and stressed he will not allow himself to think, or worry in any way, about his future.

"I focus on improving and convincing my players to do certain things," Setien said, quoted by Catalan newspaper Sport. "Then there are things that I can't control."

There are areas where Barcelona need to improve that cannot be resolved in a matter of weeks and perhaps need significant investment and changes of personnel.

But if they head into the Champions League resumption with a swagger back in their step, and belief in their coach, the Blaugrana could threaten Europe's elite again.

The essence of youth is also growing, and could benefit a squad that contains a number of players coming towards the end of their peak years, or already on the down slope.

Even Messi, now a record seven-time Pichichi winner at the age of 33, cannot go on setting records and carrying the weight of the Catalan public's expectationsforever.

Fati, Ronald Araujo and Riqui Puig all started against Alaves, and Setien described the youngsters as "certain to be the future of this club".