Sarri the scapegoat: Why Juventus sacked their coach two weeks after Serie A title triumph

Sarri the scapegoat: Why Juventus sacked their coach two weeks after Serie A title triumph 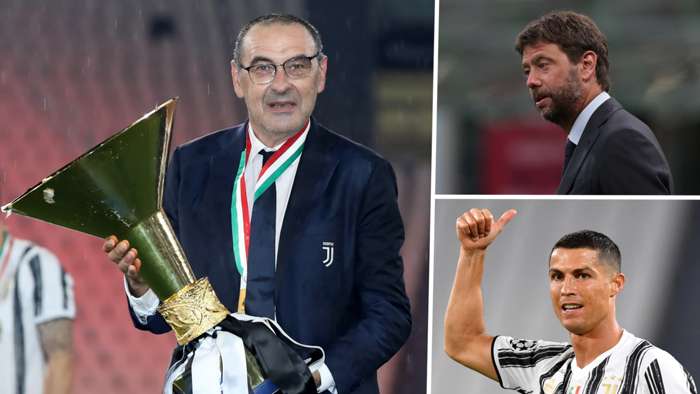 Both had been coming, and the latter merely made the former inevitable.

It may seem strange to some, of course. Less than two weeks ago, Sarri was celebrating his first Scudetto.

However, Serie A titles now count for little at a club that has won nine in a row. Sarri was hired to add style to Juve's success.

Winning, we were told, was no longer the only thing that counted in Turin; the Bianconeri now also wanted to play beautiful football and were prepared to give Sarri time to deliver it.

Fabio Paritici had insisted only last month that "without doubt, Maurizio will be the Juventus coach next season". Nobody believed him, though.

Sarri's future was always going to hinge on the outcome of the club's Champions League campaign.

As club president Andrea Agnelli said, the European trophy"is no longer a dream; it's an objective" and one that Juve never looked remotely like realising this season.

The Bianconeri were perhaps unfortunate to go out on the away goals rule, given Lyon managed just a solitary shot on target in the second leg in Turin.

However, Juve had turned in yet another horribly unconvincing performance, their reliance on Cristiano Ronaldo and Paulo Dybala again made painfully clear.

Ronaldo accounted for both goals, while a clearly unfit Dybala had to be thrown on midway through the second half with Juve unsurprisingly struggling to create clear-cut chances without their most innovative player.

It was sad to see the Argentine crying as he left the field, having been forced off with the recurrence of the thigh injury which had made him a doubt for the game in the first place.

No tears will be shed for Sarri, though. At least not at Juve. His arrival was greeted with scepticism; his departure with joy.

Brazilian winger Douglas Costa even 'liked' Juve's post confirming Sarri's dismissal. At the time of writing, the only Juventus players to have publicly paid tribute to the 61-year-old are Leonardo Bonucci, Paulo Dybala and Danilo.

It may seem trivial but it is indicative of Sarri's poor relationship with his squad. Instead of growing closer the longer the season went on, the coach and his players only drifted further apart.

Dybala, who was named Serie A's MVP for 2019-20, may have Sarri to thank for resurrecting his Juventus career but, crucially, captain Giorgio Chiellini was never convinced by the former Napoli boss, while Cristiano Ronaldo was dead against attempts to deploy him as a centre-forward.

Bonucci even admitted that he and his team-mates had "struggled to to interpret the coach's philosophy". The net result was that Juve became, as the Gazzetta dello Sport put it after the Coppa Italia final loss to Napoli, "a sad caricature of Sarrismo".

Miralem Pjanic was among those most enthused by Sarri's appointment last summer, admitting that he was hoping to have "150 touches a game". But, tellingly, the Bosnian became emblematic of Juve's difficulties with their new boss' tactics.

He was meant to be central to Juve's game plan; he was marginalised by the end of the campaign– and utterly perplexed as to why Juve's players had failed to understand Sarrismo.

They were supposed to play a short, sharp passing game; instead they were predictable in attack and porous in defence.

"It's surprising, considering the way the coach played at Napoli, where everyone was involved and fully committed to that project," Pjanic told Sky Sport Italia.

"We played a different type of football. I am not the only one to say that, it’s obvious. But it takes time to develop that style of play."

It's a very valid point.

Agnelli and Paratici charged Sarri with revolutionising Juve's style of play – yet afforded him neither the patience nor the players needed to achieve that ambitious goal.

The net result was an almost total dependence upon the individual brilliance of Ronaldo and Dybala, with the engine room adding almost nothing from both a defensive and offensive perspective.

As Claudio Marchisio told the Gazzetta, "The midfield isn’t at the level it was when there was myself, (Andrea) Pirlo, Arturo Vidal and Paul Pogba."

Indeed, this is the weakest Juve, stylistically and statistically, since 2011, when they finished seventh. Damningly, they are further away from winning the Champions League now than they were before Ronaldo arrived two summers ago.

Therefore, the rumours that surfaced on Saturday that Paratici would also be sacked made sense. After all, it was he who pushed for Sarri's appointment; and he who assembled an ageing squad lacking cover at full-back, midfield and centre-forward.

However, Paratici survived while Sarri was scapegoated.

So, while the Tuscan can now call himself a Scudetto winner, he would be forgiven for wondering if he made the right call in moving to Turin.

The two had certainly never looked like a good fit and it was telling that a source close to Sarri told the Gazzetta on Sunday that "he was never truly happy at Juve".

A chain-smoking, Bukowski-readinganti-hero who had previously flicked a V-sign at Juve fans was always likely to struggle with being the face of the establishment.

Many of his most ardent supporters were horrified by his decision to 'sell out', seeing his appointment as a betrayal of his perceived values.

"We believe that he was sincere in his being 'anti-system' and consequently the move to Juve means contradicting many things that he himself has said in recent years, also about Italian football: the fact that Serie A is destined to become impoverished in the absence of balance, due to Juve," Gianmarco Volpe, one of the creators of the Facebook page 'Sarrismo - Joy and Revolution' told the Gazzetta last year.

"If you really think these things, you do not accept the job."

The great irony now is that despite winning his first Scudetto he has lost much of the respect and support he once commanded.

It will be fascinating to see where he goes from here and whether another big club, like Chelsea or Juve, will be willing to hire a coach who has an obvious issue winning over squads packed with superstars and proven winners.

Juve, of course, have already moved on, appointing coaching novice Andrea Pirlo as their new boss, meaning the Old Lady's future is just as uncertain as Sarri's.

In the end, then, neither the Bianconeri nor Sarri have benefited from what was a surprising move by both parties.

"Agnelli tried to break with the past by hiring Sarri," former AC Milan coach Arrigo Sacchi wrote in the Gazzetta on Sunday. "He tried to move towards the future but sadly didn't have the patience to see it through.

"Sarri had accepted a 'Mission: Impossible' at Juventus. He needed patience and collaboration from the club, but the Juventus directors always believed in different values. The house motto is: winning is the only thing that matters.