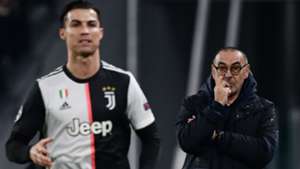 Maurizio Sarri says there is nobody in the world who can replace Cristiano Ronaldo, with the Juventus star having flown home after his mother was taken ill.

Dolores Aveiro, 65, was hospitalised in Madeira after suffering a suspected stroke on Tuesday morning.

She is now reported to be in a conscious and stable condition but will be kept under observation at the Dr Nelio Mendonca Hospital.

Ronaldo flew back to Portugal on a private jet having been granted compassionate leave by the Serie A champions.

"I don't know what will happen, it is a personal matter, so he will discuss it when he returns," Sarri told a press conference.

"His return will depend on how the situation develops.

"It's obvious that the tactics and plans do change depending on whether Ronaldo is available or not.

"There's no replacement for him in the whole world, so naturally we'd do something different in his absence".

Juventus are in action in the semi-finals of the Coppa Italia on Wednesday, hosting AC Milan in the second leg after a controversial 1-1 draw in the first game.

Their Serie A game with Bologna on Sunday has been postponed due to the ongoing coronavirus crisis in Italy, but their postponed game with title rivals Inter could be rearranged for the evening of Monday 9.

Inter president Steven Zhang launched a furious attack on Serie A president Paolo Dal Pino on Monday, calling him "the biggest clown I have ever seen" over his handling of the league's fixture chaos.

Though he started the season slowly, Ronaldo has been in stunning goalscoring form in recent months and Juventus are sure to feel his absence.

He has scored in 11 consecutive Serie A games, netting 16 goals during that spell and last failing to find the net in the league on November 10. He is the league's second top scorer with 21 to his name, trailing 27-goal Lazio forward Ciro Immobile.

Sarri will likely turn to one or both of Paulo Dybala and Gonzalo Higuain in Ronaldo's absence.

Dybala has 12 goals to his name in all competitions this season, with Higuain netting eight.