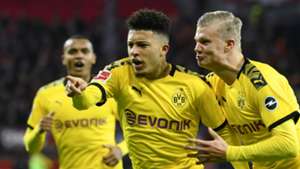 Jadon Sancho is "very happy" at Borussia Dortmund and the German giants have "enough money" that any interest from Manchester United can be shunned, says the club's chief executive Hans-Joachim Watzke.

Speculation continues to suggest that the England international winger will be targeted by the Red Devils over the summer.

A return to Manchester could be made by an exciting talent who emerged through the youth system at City before taking the brave decision to open a new chapter in mainland Europe.

Sancho has starred for Dortmund, with the 19-year-old adding another 14 goals and as many assists to an impressive haul this season - while taking his collection of senior Three Lions caps to 11.

United, or Premier League rivals Liverpool, would welcome the opportunity to buy into that current ability and future potential, but Watzke believes an in-demand forward could decide to stay put.

He told BBC Sport of Sancho: "I think he has the feeling that the club does have a good future.

"In my opinion, I don't think he wants to leave."

Watzke concedes that it is "not clear what will happen" with Sancho, but maintains that no indication has been offered that the player wants out in the next transfer window.

He added: "We have a very confidential relationship between us and him and his agents.

"We will discuss it."

Dortmund are under no financial pressure to part with a player they acquired for just ?10 million ($13m), with the Bundesliga title hopefuls determined to keep an exciting squad together which now also includes Norwegian striking sensation Erling Haaland.

Watzke said: "It's not a question of money.

"For us, it would be the best position if he stays at Borussia Dortmund.

"We have enough money. We want to have titles. I think this team has a lot more potential with Jadon than without Jadon."

Sancho was on target in his most recent outing for Dortmund, as they edged out Freiburg to remain four points adrift of table-topping Bayern Munich.

He will be hoping to get his hands on major silverware at club level this season before attention switches to international matters over the summer and the pursuit of European Championship glory with England.