Sancho's trip to England no problem for Borussia Dortmund

Sancho's trip to England no problem for Borussia Dortmund 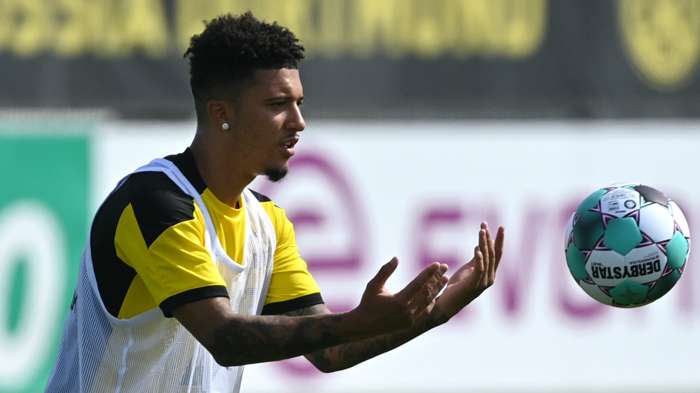 Borussia Dortmund are not concerned by Jadon Sancho's journey home to the UK duringthe coronavirus pandemic and reports linking him to a move to Manchester United.

The 20-year-old made thereturn to the UK amid claims that United are trying to lure him away from the German outfit.

However, Dortmund have set a deadline of August 10 for any deal to be finalised, with the German side set to travel to Switzerland for a training camp on Monday.

The Bundesliga club have explained that they are happy for the former Manchester City academy player to return home before they resume preparation for next season and say he did not violate any Covid-19 safety measures.

"It's common and fine for players to go home before a training camp if they're not risky," Dortmund's press spokesman Sascha Fliggesaid.

"The same goes for Jadon. From our point of view, the pictures that have been shown to us do not violate the current Coronavirus Protection Ordinance or hygiene regulations."

Dortmund are understood to be demanding around €120 million (£108m/$141m)for Sancho, though United are reluctant to match thefee and could turn to other targets if they cannot talk the Germans down from that asking price.

It has been reported that Sancho had already agreed personal terms with Man Utd, but Goal reported this week that discussions are continuing and no deal has been struck between the player and the Red Devils.

"So far, there has been no contact between Borussia Dortmund and Manchester United in terms of Sancho," he told Suddeutsche Zeitung.

"Also not directly or through alleged intermediaries."

Sporting director Michael Zorc added:"I assume that Jadon will go to the training camp on Monday and play with us for the coming season."