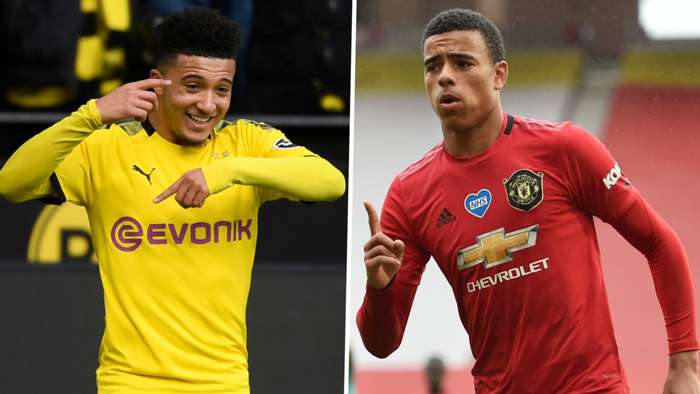 As Mason Greenwood slid on his knees in front of an empty Holte End on Thursday night, it was hard not to get swept up in all of the excitement surrounding this very special talent.

In his post-match analysis, former United captain Roy Keane said that Greenwood was destined have to have a "massive" future in the game.

There have also already been numerous comparisons with world-class players such as Cristiano Ronaldo and Robin van Persie.

Greenwood's obvious natural ability and undoubted superstar potential make him one of the most coveted players in Europe, never mind the Premier League.

So, it's hardly surprising that some fans are now wondering whether United should really still be considering spending a small fortune on Jadon Sancho – particularly in the current economic climate.

Of course, United's interest in Sancho is longstanding; it dates back to Jose Mourinho's time as manager.

Back in 2017, the Portuguese was hoping to persuade the Manchester City youth-team star to swap the Etihad for Old Trafford. However, Sancho instead decided to move to Borussia Dortmund.

It proved a shrewd move on the part of the winger, who has since broken into the England squad having established himself as one of the most exciting attackers on the planet.

United remain keen on signing Sancho, as current manager Ole Gunnar Solskjaer is a huge admirer of the 20-year-old.

However, the fee is a major sticking point.

Before the suspension of football caused by the Covid-19 outbreak, Dortmund were demanding in excess of €100 million (£91m/$112m) for their most prized possession and CEO Hans-Joachim Watzke says that nothing has changed in that regard.

"There will be no coronavirus discount on Jadon," he told Sport1. "We have left the period where we had to sell players. I don't think there will be a summer transfer for him."

That has not stopped Dortmund making contingency plans, though.

“If Jadon were to leave, we would once again be active in strengthening our attack," sporting director Michael Zorc told Kicker. "There are certainly one or two players we have our sights on."

Dortmund have made it clear that if Sancho were to ask to leave, and a club were willing to meet their asking price, they would not block his exit.

The ball is very much in United's court, then, and it really is just a question of money, as there's no denying that Sancho would be an excellent addition to Solskjaer's squad.

There is, of course, some concern that his arrival would hinder Greenwood's development.

Solskjaer said a year ago he would not be signing another striker because he didn’t want to block Greenwood’s path to the first team and that decision has paid off spectacularly this season.

Indeed, after the win at Villa Park, the Norwegian effectively admitted that the teenager has now locked down a starting spot alongside Anthony Martial and Marcus Rashford in attack.

United’s front three have certainly been prolific since the restart.

They now have 56 goals between them in all competitions this season, with Greenwood contributing 16. There's certainly no need to break them up now.

However, Sancho would add an extra dimension to the attack next term and his presence wouldn't necessarily mean less game time for Greenwood.

The Bradford native is a two-footed, versatile forward who can play anywhere across the front line. It might not be his starting spot that comes under threat if Sancho joins for next season.

Of course, Sancho presently has more strings to his bow; he creates more goals and chances than Greenwood. But it's not really a question of comparing the two; it's about imagining how they would fare in the same team.

United are finishing the season with a flourish but they are still only fifth in the Premier League standings. If they really are to challenge Liverpool and Manchester City for the title next season, they will need more quality and more depth. Signing Sancho would provide both.

Solskjaer wants a squad with intense competition for places, which, as he knows himself from his own playing days at Old Trafford, is what drives a team to greatness.