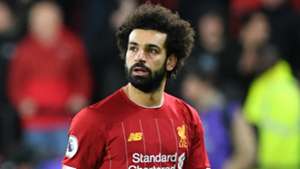 Mohamed Salah won't be packing his bags and heading for the exits at Anfield this summer, according to Steve McManaman, who doesn't believe the Liverpool forward will be tempted by possible moves to Real Madrid or Barcelona.

Salah is currently enjoying another superb season with the Reds, playing a key role in their ongoing Champions League defence and Premier League title bid.

The 27-year-old has hit 19 goals in 37 appearances across all competitions, including 15 in the top flight, as he continues to chase down a third successive Golden Boot.

The Egypt international has established himself as one of the finest attacking players in world football during his time on Merseyside, attracting attention from a number of high-profile potential suitors in the process.

Madrid have been linked with Salah on several occasions over the past year but McManaman sees no reason why he would be interested in swapping the Premier League for La Liga at present.

"I see his future at Liverpool to be honest," the former Reds midfielder said in his latest column for HorseRacing.net.

"Regarding this whole aura about Real Madrid and Barcelona, I think players are consistently linked with them because they were both considered the best sides in the world back in the day. The best sides are now in the Premier League.

"The best teams in Europe now are in England, so I don't understand the premise of why you need to go to La Liga at the minute."

McManaman went on to express his belief that Spanish football is on the verge of entering into a "transitional period", with a number of La Liga's top stars approaching the latter stages of their careers.

"Unless Real Madrid sign four or five big players in the near future, then they're just going to play second fiddle to the Premier League sides," he added.

"The same applies to Barcelona. Lionel Messi is going to retire in the next few years and Real Madrid are going to lose Sergio Ramos, Toni Kroos, Luka Modric and Karim Benzema. They're all in their thirties and there's going to be a real transitional phase going on in Spain over the next couple of years.

"We are starting to see the decline of the top Spanish sides before this transitional period. In my opinion, the future of superstar footballers belongs in England."